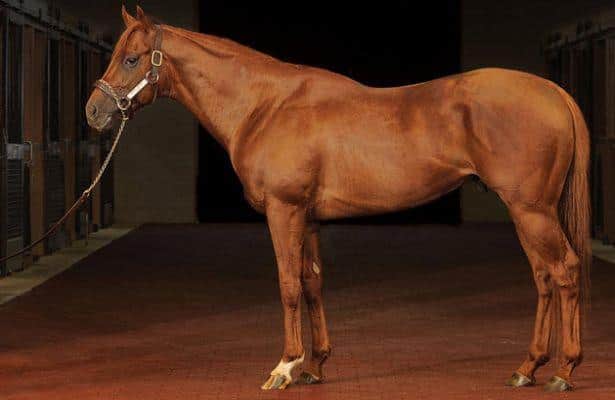 Photo: WinStar Farm
I’ve always been a pedigree fanatic, but until now have kept it in the closet. However, after watching last night's Fasig Tipton Sale at Saratoga, I must admit, I was impressed by the quality that came and went from the ring.
I came in a bit late, so forgive me if I missed out on any of the earlier youngsters, but the first to catch my eye was hip number 37, who didn’t even make my list based on pedigree. The colt, sired by Trappe Shot had a great deal of presence about him, fellow blogger Casey Laughter and I noticed that right away. He wasn’t a giant, nor was his build particularly eye catching, but he was alert but calm, barely turning a hair. For such a young horse, his overall demeanor really was impressive.
Next came hip 58, who based on pedigree I was excited to see. I was not disappointed in the least. He wasn’t the largest colt, but he carried himself very well and was put together very well, for a horse so young.
Based on pedigree, his is beautiful. Medaglia D’Oro doesn’t always sire the best colts on the planet, but it never hurts to have him as a sire, and he did happen to sire grade one winning Juvenile Violence. However, it is the bottom half that caught my eye. Speed is mixed with Stamina as we come across highly sought after sire Distorted Humor, sire of Breeders Cup Classic victory Drosselmeyer. Also on his dam’s side you find the brilliant Unbridled’s Song. Normally I’m not a fan, as their soundness is in question. However, because there are other influences for durability and distance in the pedigree to help balance the fragility of Unbridled’s Song, I don’t think it will be an issue here.
Hip 64 was the next that really caught my attention. A very, very good looking son of Drosselmeyer (pictured above), out of an Empire Maker mare. Physically he was exquisite looking. Well built, good bone, strong look. His build is that of a horse who will want to run all day, and with a pedigree like that, who can be surprised?
Hip 69, was physically the most impressive one to step into the ring. The filly, didn’t look like a filly and didn’t look like a yearling. She has the build that was tall, wide, and long, and it’s not surprising, considering her pedigree. Tapit, her sire is known for stamping his offspring with imposing builds, as is Tiznow, who is the broodmare sire.
I personally love how Tapit is on top as a speed influence with Tiznow, a later maturing, stamina influence on the bottom. Tapits always have plenty of speed, but not many have the stamina to carry it, nor do they always progress well from their juvenile year into their three year old season. Tiznow was best at ages 3 and 4 years old, while also excelling at the Classic distance. Based off of pedigree and looks, this one should be kept on everyone’s watch lists.
Hip 74 was a well-built son of Distorted Humor. His build wasn’t overly flashy, but he was tall, well-muscled, and long bodied, like a horse who will appreciate distance and maturity. Distorted Humor is a well-known commodity at stud, but the dam’s side certainly won’t hurt this colt at all, seeing as how Sadler’s Wells is the Broodmare sire and the colt goes back to Secretariat. Personally, I’m wanting to see this one try out the turf. With names like that, taking the to the green should come naturally.
Not to be outdone by another Tapit, this filly walked into the ring, and the first thing I notice was how much she resembled Hansen. She was a light grey, not huge like hip 69, but well-built and compact, with plenty of muscle. She was not as long nor as tall as hip 69, but what I believe caught the attention of the bidders was the bottom half of her pedigree….she was out of champion She Be Wild.
One rule many breeders love to use is speed on top, stamina on bottom. She Be Wild wasn’t a distance lover herself, but Offlee Wild could handle a route of ground, as could his sire, Breeders' Cup Classic winning, Wild Again. She would become your sale topper at $1.15 million.

My overall impression of the sale was very positive. There were many quality yearlings that came through that ring, and it seems that breeders are turning their sights back towards bettering the breed in durability and distance. My personal favorites of the sale were hip 69 and hip 58. Both had pedigrees that were outstanding, both were very well put together individuals. Hopefully in the coming year, they will build off the potential that I, and their new owners, saw in them.