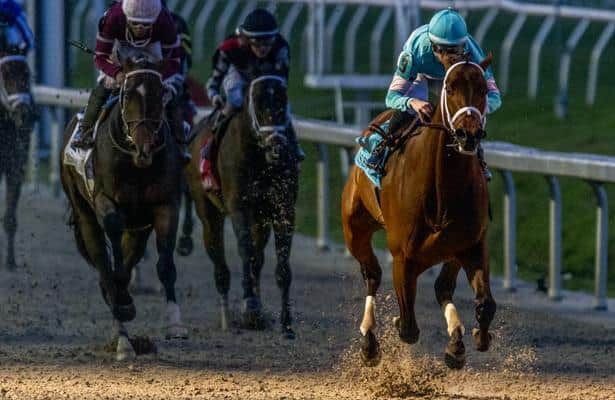 A Risen Star Stakes (G2) so packed with entries it split into separate divisions defined a busy weekend on the 2020 Kentucky Derby trail. In my most-recent review, I didn't grade a prep out lower than an "A," but that's about to change. Here's a closer look, starting at the top...

On the Board: Enforceable, Silver State

Analysis: After his maiden victory in November of last year, the half brother to champion Monomoy Girl delivered nice performances, but not wins. That changed Saturday.

Mr. Monomoy flashed his speed early, going to the lead and proceeding to set a solid pace at Fair Grounds. Blackberry Wine put in a menacing bid through the far turn, at one point heading the leader, but Mr. Monomoy turned him back. looking like he could go by Mr. Monomoy. That did not happen. Enforceable closed strongly for second but never really threatened the winner.

The topic leaving Lecomte Stakes (G3) weekend was that runners in the feature might not have been as strong as those in an earlier allowance flight won by Blackberry Wine. However, the Lecomte's top three all came back to hit the board here, while Blackberry Wine finished seventh. This Risen Star also finished nearly a full second faster than the second division.

Mr. Monomoy, who has run both on and off the lead, moves forward as a Derby prospect with a tactical sort of speed that has proved useful in the race's points era.

On the Board: Wells Bayou, Answer In

Analysis: Testing out a new strategy by sticking closer to the pace, Silver Prospect bounced back from his Smarty Jones defeat Monday at Oaklawn Park.

Silver Prospector never was more than 1 ¾ lengths off the lead in the Southwest having run seven lengths from the front in his 3-year-old debut. Last time, he had too much work to do late.

In the Southwest Stakes, Silver Prospector still had to gun down a loose front runner in Wells Bayou, but the margin was much less to close, with that one only a length ahead with a little more than a quarter mile to go.

Wells Bayou gave his best effort but simply could not re-rally. However, in his chase, he put another 5 ½ lengths between himself and third place finisher Answer In.

Despite staying close to a quick early pace, Silver Prospector’s final kick was not compromised. His final 1/16th was caught in :06.36 by Trakus. In the process, Silver Prospector emerged as a much more promising Derby prospect.

On the Board: American Farm, Indian Peak

Analysis: This race has never produced a real Kentucky Derby prospect, and I’m not inclined to think that will change in 2020.

Azul Coast is a Bob Baffert trainee who was well publicized going into last month's Sham Stakes (G3). However, he was easily beaten by a very green stablemate, Authentic.

Baffert's top prospects seem to run at Santa Anita and Oaklawn, and that Azul Coast wound up here reflected where he sits in the barn's pecking order. A narrow win over this soft field didn't change that.

The pace for this race was incredibly slow and won’t be replicated in more serious Kentucky Derby preps. Perhaps this one will succeed somewhere, just not on the Derby trail.

On the Board: Major Fed, Ny Traffic

Analysis: The Risen Star Stakes wound up the best and worst race(s) of the weekend.

The second division's pace scenario resembled the first in the early stages; however, after the first 3/4 of a mile, things slowed down dramatically. The final eight was clocked in :13.11, with the final three furlongs going in a pedestrian :38.66.

By comparison, the final three furlongs were run in :37.58 in the first division.

The only reason Modernist and Ny Traffic were able to stick around late is because there were no quality closers to come get them. Had Enforced been in the second division, I'd imagine him winning going away.

While Modernist moves on with the points likely to run in the Derby, I think he'll have to improve just to contend in his likely final prep, the Louisiana Derby (G2).