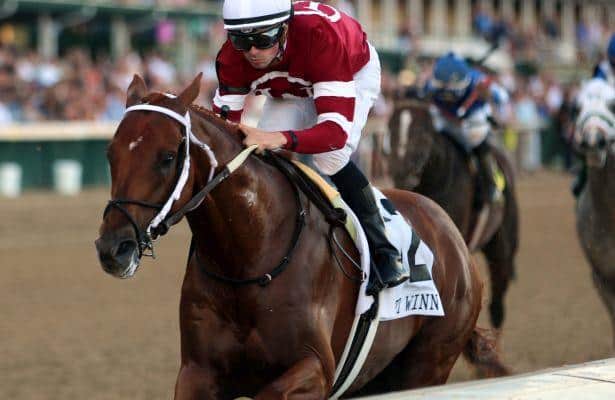 The 2017 season started out looking like a one-horse race for Horse of the Year, and it's going to end that way. However, the horse that sits well clear of the rest isn’t the same many had pegged in March.

Arrogate’s performance in the Dubai World Cup landed him on top of Longines World's Best Racehorse list, updated last week and surrounded by controversy. But Longines ranks horses based on their single most-dominant victory. When it comes to overall resume, no contender is more deserving of Horse of the Year than Gun Runner.

During the first three months of 2017, it was clear that Arrogate, the Bob Baffert-trained monster, was establishing a stranglehold of the title. He dominated the Pegasus World Cup, the richest race in the world, and followed that effort up with an incredible from-the-clouds victory in the Dubai World Cup. After those two spectacular displays of dominance, it was hard to imagine a scenario where the steely grey didn’t walk away without Horse of the Year honors.

There were still many who had Arrogate on top of their Horse of the Year lists, with the belief that he would return to form in the Grade 1 Pacific Classic. Unfortunately, while Arrogate ran a much-improved race when second to stablemate Collected, it was still a far cry from the horse we saw in the Pegasus and Dubai world cups.

In the meantime, Gun Runner remained sharp in winning the Woodward Stakes in a 10 ¼-length romp at Saratoga. The win marked Gun Runner’s third Grade 1 win in a row, whilst Arrogate had lost twice in his two tries since Dubai -- and just like that Gun Runner was put on top of the national rankings.

Of course, Arrogate still could have seized the top spot back with a win in the Breeders’ Cup Classic, but it became clear from the break it wasn't to be. Instead, Gun Runner continued his dominance, conquering a field that Baffert considered one of the strongest assembled.

No horse had a season as dominating as Gun Runner. He won over four different tracks, taking races from East to West. His average winning margin was just more than six lengths in some of the nation's top tests for older horses.

The NTRA's Moment of the Year will belong to Arrogate, but when it comes to Horse of the Year, only one choice makes sense. Gun Runner should win, and should garner every Eclipse Awards vote.