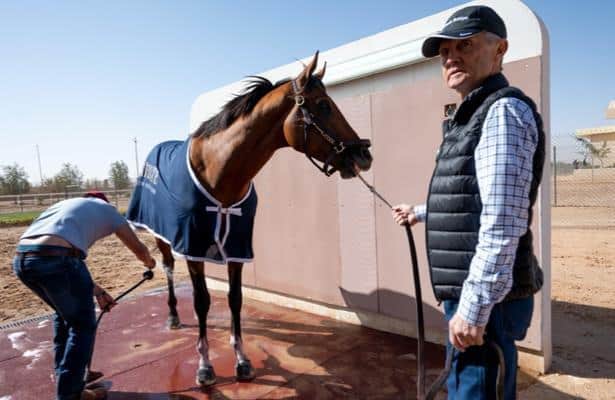 Maximum Security is a horse both famous and infamous, and that was before Monday's bombshell unsealing of documents by the U.S. District Attorney's office in New York that claim trainer Jason Servis covered up performance-enhancing drug use in the champion colt.

Servis had long been suspected of doing something to seemingly boost the talent of horses claimed and brought into his barn. And given the the evidence against him, including tapped calls, it seems the trainer's fate is sealed.

But what does this all mean for the supposed best dirt horse in training?

SGF-1000, the substance feds found Servis administering to Maximum Security, has been used previously in breeding stock to boost healing and fertility. For instance, according to a 2011 Thoroughbred Times article, the drug increased fertility of a 26-year-old stallion from 60% to 90%, citing "growth factors" similarly evidenced by Monday's indictment.

Taylormade Equine, a supplies vendor in Australia, advertises SFG-1000 as "only for the serious competitor with the drive to be a champion." And if that isn't fit for this scenario. SFG-1000 also allows for "improved stamina and performance levels." And those are only a few benefits of this drug, which is illegal in the U.S.

With this knowledge, can Maximum Security still lay claim to 2019's Eclipse Award for Champion Three-Year-Old Male? Likewise, is it right that he remains the "winner" of any races in which SFG-1000 may have been in his system?

Remember, the son of New Year's Day debuted as a $16,000 claimer. It's one thing to have a few physical issues. Without SFG-1000, however, there's room to speculate that Maximum Security wouldn't have developed in some four months from that to a horse crossing the finish line first in the Kentucky Derby.

“The charges documented in today’s federal indictment against 27 individuals in horse racing are abhorrent," said Alex Waldrop, president and CEO of the NTRA, which oversees the Eclipse Awards. "There is no place in our sport for individuals who treat horses with disregard for their well-being or who undermine the integrity of our competition for personal gain.

"We support the effort to bring these charges to light and are hopeful that their swift adjudication will help assure other horse racing participants and the public at large that our sport will not condone or tolerate the behavior alleged in the indictments."

Just imagine how different 2019 would have been without Maximum Security.

Bodexpress might have broken his maiden in the Florida Derby (G1). Without some historic interference in the Kentucky Derby, maybe that goes to a colt like Code of Honor. And if that scenario plays out, the Eclipse Award race looks much different given Code of Honor's subsequent victories in the Travers Stakes (G1) and Jockey Club Gold Cup (G1).

Already, 2020 would have been different, too, with Maximum Security a recent winner of the inaugural Saudi Cup, a $20 million race. Not only would Midnight Bisou's connections be significantly richer, but she'd be the early favorite for Horse of the Year as the racing world's next heroine.

Instead, actions sparking counts against Servis, which the U.S. District Attorney's Office of the Southern District of New York say carry a maximum sentence of five years apiece, may have robbed the racing world. As unfair as it may seem to punish Maximum Security for a trainer's actions, think of the connections to horses he defeated along the way, too.

This isn't to say Maximum Security lacks heart or grit. But $16,000 claimers can possess those same qualities without the talent to win at racing's highest level.

Maximum Security stands to lose his championship now, and later we'll find out what sort of horse he really is, most likely in a new trainer's care.