Kentucky Derby 2020: Who is working the best? 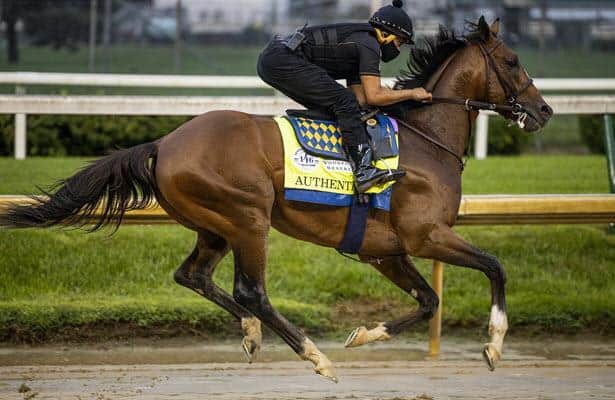 In the lead-up to the Kentucky Derby, how a horse is working can be very indicative as to how they will perform on race day.

This could hold even more true this year as these 3-year-olds have had to stay on their game for four months longer than normal.

With that in mind, let’s look at who might be holding their form best of all.

Tiz the Law: The son of Constitution has been on his game since starting his year off in February. Given that it has been nearly seven months, plus a few unexpected schedule changes this season, it would be natural for him to have a dip in form.

That could not be further from reality as the colt continues to improve. He dominated the Belmont Stakes (G1), then made a mockery of his foes in the Travers Stakes (G1). If his last work is any indication, the flashy colt is still heading in an upward trajectory.

Most of Tiz the Law’s final move was shrouded in darkness, but once his blazed face emerged around the turn, it was easy to see that he was doing everything on his own. Ears flopping around as the rider’s hands remained motionless. The final time was :59.21, done as easily as could be.

Authentic: The Baffert trainee may have some distance questions hanging over his head, but Baffert is looking to put as much bottom in him as possible with by giving him a series of four consecutive 6-furlong drills. His last looked particularly good.

Authentic has always had an efficient way of going, so seeing that here is nothing new, but what I liked was how he came home in the stretch. He remained relaxed, yet on the bit the entire stretch and when he was given his cue just before the wire, he took off.

The four month delay in the start of the Kentucky Derby likely helped this May foal grow up a little bit more. By the looks of his works, he has improved off his already good form.

King Guillermo: The layoff seems worrisome, but if his last couple works are any indications, this colt is as good as ever.

Two works back he went 5-furlongs in a sizzling :58.2, indicating that his level of sharpness will not be an issue. This last work was much different. The son of Uncle Mo worked a half mile in a slow, controlled :52.20.

These drills have all been over the Churchill Downs main track, which bodes extra well seeing as he will have the edge of being used to the track, unlike some of his key rivals.

Ny Traffic: The Haskell Invitational (GI) runner-up seems to be working well off his defeat. His last move was 5-furlong Aug. 28th, getting the distance in a snappy :59.45. He beat his workmate by 3-4 lengths while only under mild encouragement.

He will need some luck to get out of the bridesmaid roll here, but he looks sharp coming in, and could be live at a price.

Enforceable: This one might very well be too slow to compete with the big boys on a normal day, but he is as solid as they come, and always makes it up for a piece of the pie.

His final work came over the Churchill Downs main track and he could not have looked any smoother. The work was a half mile in :49.60. The work before that was a 6-furlong move in 1:12.20. He looked just as good that day over the track and outworked his mate with ease.

If the pace is quick and he can work out a good trip, we could see Enforceable making his presence felt down the long Churchill Downs stretch.

Gallop Notes: Wednesday morning several shippers took to the Churchill Downs main track for the first time. As a bonus, the track had taken on quite a bit of rain, which gave us the opportunity to see if any of the California shippers may have looked better or worse on the off going.

Gamine and Authentic both seemed to handle the off surface well. Authentic glided over it just as easily as he does a fast surface, and Gamine was on the bit ready to roll at the first chance. Honor A.P. is not the prettiest of movers, making it difficult to know if he truly handled the slop.

Ny Traffic looked great, moving very powerfully during his gallop. If that was any indication, the son of Cross Traffic should have no issue should the track come up sloppy.

Conclusion: The favorites are looking very well leading up to the Kentucky Derby. Expect each of them to perform just as well if not better than their form has been in prior starts. Enforceable and Ny Traffic make intriguing longshots, especially if they can work out good enough trips.