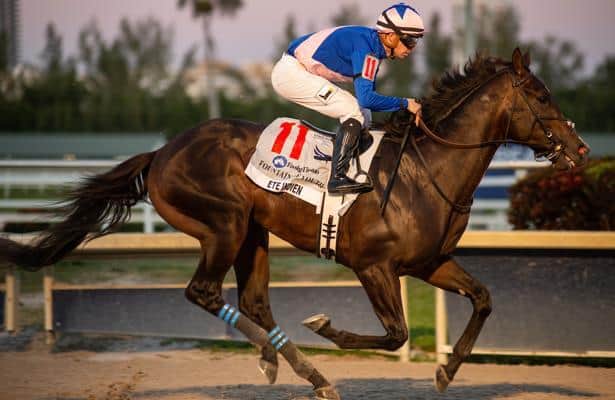 The Fountain of Youth (G2) owned the 2020 Kentucky Derby prep spotlight over the weekend, locking in the next contender when Ete Indien delivered at Gulfstream Park. But how does the performance measure up?

On The Board: Candy Tycoon, As Seen on Tv

Analysis: I originally leaned toward an A due to the sheer visual impressiveness of the win. However, upon further inspection, it looks like Ete Indien ran essentially the same race as when second in the Holy Bull Stakes, (G3) -- only this time, he didn't have to worry about early Derby favorite Tiz the Law.

Wheeling back Saturday, Ete Indien went directly to the lead to set nearly identical fractions as in the Holy Bull, also a 1 1/16-mile race. As Seen on Tv, last seen finishing second to Chance It in the Mucho Macho Man Stakes, attempted to make a move on the turn but just couldn’t stay with Ete Indien.

The son of Summer Front stopped the clock in 1:43.02, about a second shy of the final time in the Holy Bull. And that makes perfect sense, as he was three lengths behind Tiz the Law in that race.

So we leave the Fountain of Youth considering Ete Indien a worthy Derby contender having won a 50-point prep. But even trainer Patrick Biancone has said the colt will have to improve to top Tiz the Law when they get a rematch March 28 in the Florida Derby (G1).

That's not to say it can't happen. Three-year-olds are always eligible to jump up, and Ete Indien offers the type of front-running style that plays well at Gulfstream Park. Meanwhile, Tiz the Law has run into traffic trouble in the past.

Both the other board hitters, Todd Pletcher-trained maiden winner Candy Tycoon and Kelly Breen's As Seen On Tv, proved worthy of another try in a final prep. Whether they'll want to tangle with the big names in the Florida Derby is another question.

Oh, and about Dennis' Moment? He ran too poor to be true. Connections haven't evidenced any physical issues since the Fountain of Youth. Sometimes they just need one, and Dennis' Moment took plenty of dirt Saturday. That said, it's more than fair to question that even when at his best, Dennis' Moment's just not as talented as many thought.