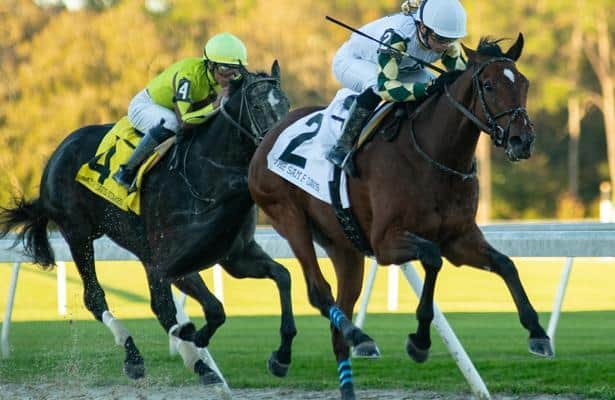 This weekend may have been light on quantity when it came to 2020 Kentucky Derby preps, but there's plenty to discuss after Independence Hall suffered his first defeat and Nadal continued his emergence at Santa Anita Park. Here's what we learned...

On the Board: Independence Hall, Ajaaweed

Analysis: Over the past decade, a pair of sixth-place finishes by Destin (2016) and Tapwrit (2017) represent the best results for a Derby horse exiting this prep. There stands a chance the 2020 edition could be much more meaningful.

Sole Volante, while he began his career on turf, is now a winner of three of four starts, rallying off a fast pace that obviously wilted Independence Hall. The two dueling pace setters completely dropped out of the race, and Independence Hall, who ran close to them early on, simply came up a bit short in the stretch.

Discount the winner at your own peril. Sole Volante benefitted from a perfect setup, but it's notable too that he submitted a better performance than Ajaaweed. The Remsen (G2) runner-up saw that form validated when the winner, Shotski, came back to be second in the Withers (G3).

Sole Volante made up more than 10 lengths in third quarter of the race. A middle move like that would leave most horses empty for the stretch, but he took dead aim on a top colt in Independence Hall, who arguably ran a winning race in his own right.

On the Board: Ginobili, Fast Enough

Analysis: It's not often I give out a pair of top grades in the same weekend. But it closed strong when hype horse Nadal lived up to his billing Sunday.

Opening fractions of 21.81 and 44.09 equal a torrid pace on any level, but over this Santa Anita Park dirt course it's a rate that should have left a horse facing graded company in only his second career start reeling.

Nadal, however, showed that he is no ordinary second time starter, and quite possibly, no ordinary horse. He hooked up with Ginobili from the beginning and dueled the entire way while under an enormous amount of pressure on the rail.

Nadal held serve, looking Ginobili in the eye before creeping away in the stretch. Trainer Bob Baffert was quick to point out how this colt wheeled back on three weeks' rest and just one work. A loss would have been understandable.

We'll still need to see how Nadal does around two turns, but this looks like a classy horse at whatever his best distance turns out to be. As a son of Blame out of a Pulpit mare, he'll have every chance to stretch out on the Derby trail.

Mandaloun, Caddo River will not be in Preakness
Like beaten Kentucky Derby favorite Essential Qual...

Analysis: 3 early Preakness Stakes 2021 picks
Off the probables list, there are three Preakness...