Baffert never thought he'd get another like American Pharoah 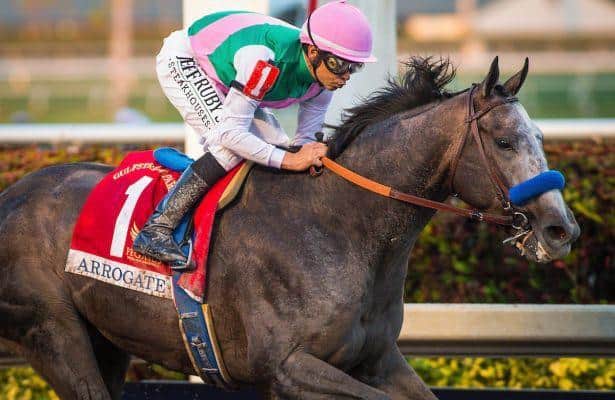 Trainers dream of getting that one perfect horse, the one that redefines the definition of ‘great’ and will do things that they never thought possible. Hall of Fame trainer Bob Baffert had the opportunity to train such a horse when he trained American Pharoah, who would go on to become the first Triple Crown winner in nearly four decades, before ending his career by romping to victory in the Breeders’ Cup Classic in track record time.

After having the privilege to train such a horse, Baffert was simply amazed when he ended up watching Arrogate pull away from the Travers field by more than 13 lengths, while smashing the track record, originally set by General Assembly in 1979.

“We came into the race pretty quiet, but I always thought we had a chance to win” Baffert said. “We were telling Mike (Smith) how good he was, and after the race he came back and said ‘boy you were right!’”

However, it wasn’t until the Breeders’ Cup Classic that Baffert realized that Arrogate wasn’t just great, but like American Pharoah, he was simply superior.

“Turning for home, I didn’t think we were going to catch Chrome,” Baffert said. “For him to catch Chrome, after having things his own way, you just don’t see that. It takes a superior horse to do what he did. Even a great horse couldn’t have done that, but Arrogate showed he was superior.”

In the Pegasus World Cup (GI) Arrogate showed his superiority once again, when he overcame the innermost to win the 12 million-dollar race easily, despite rumors that circulated social media that indicated the colt would be scratched due to an abscess in one of his hooves.

“The three-quarter shoe is used a lot in my barn to prevent abscesses and quarter cracks,” Baffert said. “I do it to even them out. Game on Dude ran with one, Pharoah even ran with a plate once, and that would make a bigger difference than shoe.”

The Pegasus performance earned Arrogate a Beyer Speed figure of 116, giving the son of Unbridled’s Song three consecutive Beyer Speed Figures over 115. The figure also represented the first time a horse had earned a Beyer of 110 or higher in their first start of the year since Ghostzapper recorded a 128 in his 2005 debut, the Met Mile (GI). Invasor, the 2006 Horse of the Year, came close when he recorded a 109 when winning the Donn Handicap (GI) in 2007.

“You have levels,” Baffert explained. “You have good, great, and then you have superior. Pharoah and Arrogate are superior horses, just like Zenyatta was superior. Just like Curlin and Rachel Alexandra.”

While Arrogate didn’t make it to the track until after the Triple Crown series had passed, due to having some trouble with sore shins, he always gave every indication that he had the potential to be great.

“I still can’t believe we lost first out with him,” Baffert said. “The great one always tip you off early though.

“Arrogate is a throwback, he’s a throwback to something, something just gelled with him. He’s got so much stamina, and with his stride, he just jumps so far, he literally runs his competition into the ground.”

Baffert sees similarities between Arrogate and American Pharoah, that go beyond just their superior ability, noting that both had tremendously long strides that allowed them to carry their speed without expanding much of their energy.

“Both of them are so fast, and they never got tired,” Baffert explained. “Pharoah might have been a little quicker, but it’s hard to tell because they are two completely different horses."

“I just can’t believe I got the two best horses I’ve ever trained in back to back years. I never believed I would get another one like Pharoah. I’m glad they weren’t running at the same time, because I’m not sure how I would’ve split them up.”

According to Baffert, like American Pharoah, Arrogate has quite the personality around the barn.

“He’s a funny horse, he's big and clumsy, he reminds me a bit of Pete’s Dragon,” Baffert said with a chuckle. “Pharoah was just a sweetheart. Arrogate is a good horse, but he likes his carrots. If you come to see him you better have a couple carrots with you.”

No immediate plans have been set for Arrogate, who shipped back to California without incident. The only plan is to keep the colt sound and happy for now.

“I’m just taking it all in,” Baffert said. “I’m not worried about him, I’m more worried about some of the other horses I have in my barn and getting them to the track.”

While Arrogate’s immediate future might not be set in stone, what he has done on the track in such a short time has stamped him as racing’s next superstar.

“He is one of the best horses I have ever been around,” said Baffert. “The scary part is he just keeps getting better and better. I feel like this year, we will be seeing what Pharoah could have done if he were to run at four.”