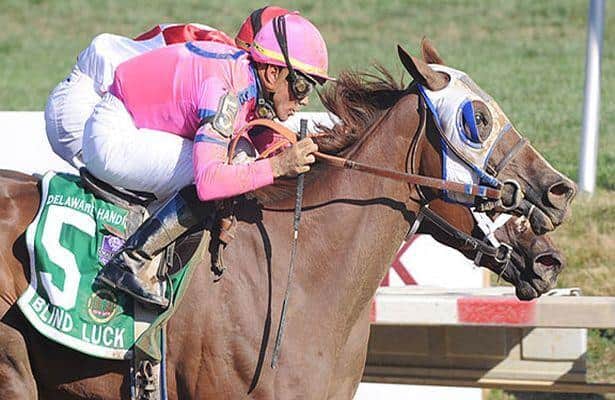 Photo: Eclipse Sportswire
It was three years ago when I attended my first Delaware Handicap. It was the summer after I completed my freshman year in college and I was excited beyond belief, because this would be my first time attending a “huge match-up” in person.
Being a college student didn’t leave me with a lot of money, and while my family enjoys horses and watching races with me, none of them have nearly the same passion and fire as I, about the sport. I had witnessed Smarty Jones’ near miss in the Triple Crown, Afleet Alex’s miraculous recovery in the Preakness, Bernardini’s power, Invasor’s invincibility, 2007 year of the three year olds. I was part of the Curlin vs Big Brown debates and the Rachel Alexandra vs Zenyatta debates. I was always in the thick of things, but never had been to a showdown like the 2011 Delaware Handicap.
That year, Delaware’s signature race featured the sixth, and what turned out to be, the final time that Havre de Grace and Blind Luck met. Their rivalry, had come full circle, beginning the year before in that year’s Delaware Oaks. Blind Luck won that time, and had beaten Havre de Grace in and two more of the other five match-ups, prior to this race.
The drama surrounding the race was well publicized, as trainer, Larry Jones, of Havre de Grace was livid over the fact that his filly was assigned the high weight by 2lbs, even though Blind Luck had the  better career record. However, they still showed up with the strapping bay, who had taken the Azeri Stakes and Apple Blossom, that year, with ease. She had beaten Blind Luck in the Azeri, at 8.5 furlongs, a distance that was more towards her liking. Now it was time to see if she was truly the better horse. This time she carried more weight, and this time she was facing Blind Luck at 10 furlongs, arguably Blind Luck’s best distance.
I was a fan of both fillies, but in 2011, I believed that Havre de Grace was the better filly. I still have the T-shirt and buttons that I picked up from that day, which shows how adamant I was. Down at the paddock, Havre de Grace looked a picture. So powerful and statuesque, it was unreal. Blind Luck looked just the opposite. She was small, thin, and unassuming. Compared to the giant stature of Havre de Grace, it was hard to believe that the little filly ever had finished ahead of Havre de Grace.
As they led the field to the track, I ran back to my seat with my family and a friend from Facebook, I was meeting for the first time, and as they loaded into the gate, I could feel my heart start to race in my chest…..this was it.
Then the bell sounded and the field was off and you could hear the thunder of the many hooves rise from the track. Havre de Grace broke inwards, third, but soon raced up just behind the leaders, with Blind Luck several lengths back in fourth. The first quarter in 23.7 and the half in 47.7 not much had changed, but after six furlongs Havre de Grace began to advance closer to the lead while Garret Gomez began to awaken the sleeping beast that resided in Blind Luck.
Around the turn Havre de Grace wrested the lead away from Life at Ten and looked to be on her way to another blowout, but Blind Luck was in full stride and closing like a rocket. They rounded the far turn and the stands erupted. I was cheering so loudly my voice cracked and it felt as if my heart would burst through my throat. It was a duel that lasted the entire stretch, approximately 24.5 seconds, but those seconds felt like an eternity.
The two fillies dead locked into battle. Neither giving an inch, refusing to crack under the other’s continuous pressure. Neck and neck they raced, head to head, stride for stride, in a heart pounding, nail biting, soul stirring stretch drive, until finally, they hit the wire, and it was Blind Luck’s white nose catching the bob.

Havre de Grace would run on to be Horse of the Year, and the 2011 Delaware Handicap would be named the Race of the Year. For me, it still ranks as one of my all-time favorite races. I may have been rooting for Havre de Grace, but after such a thrilling performance, a performance that embodies the reason I love this sport, I could not walk away disappointed. Two fantastic mare laying it all out, in the final race of a great rivalry that will not soon be forgotten.