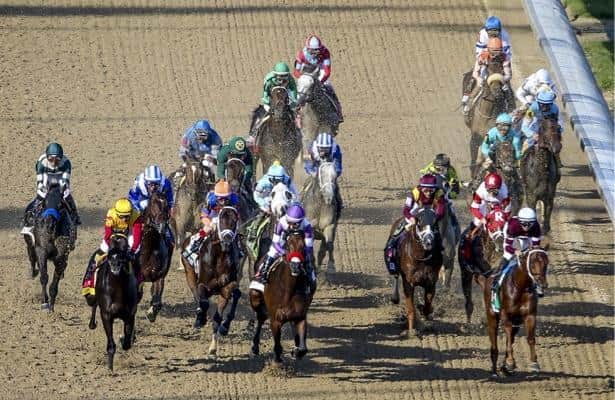 Post is important in any race, but in the Kentucky Derby, post position can mean you pick will win or lose. In the 2021 Kentucky Derby, that could be even more true considering how evenly matched this class of 3-year olds seems.

Before last year, when Churchill Downs debuted the new 20-horse starting gate, 1-13 and 14-15 were known as trouble spots because of the extra space between the main gate and the auxiliary gate. If last year was any indication, we should expect another uneventful break for the 147th Kentucky Derby.

Be that as it may, post position in a 20-horse field is still extremely important, which is why I will break down the winners and losers of the Kentucky Derby draw.

Known Agenda: As odd as it seems to say the occupant of the rail position is a “winner” of the draw, it is true in this case. Known Agenda has no true speed to his immediate outside, and with the inside rail not positioned directly in front of his stall, he has no pressing reason to alter his running style. The son of Curlin should work out a ground-saving trip like he had in the Florida Derby.

Traffic could pose a concern, but that is always a worry in a large field. And Known Agenda already shown he has no problem threading his way through traffic.

Medina Spirit: The Baffert trainee has gate speed, which he has shown on many occasions. This should serve him well coming away from the 8 post, inside of most of the speed. Despite being fleet footed, he also is quick to settle once he has established position.

This will be useful to his rider, who should be able to secure a good position early without having to worry about getting caught in a speed duel with Mandaloun.

When looking at who landed where, Highly Motivated landed the perfect spot. He is outside of most of the main speed, which will allow him to relax just off the pace and pounce. This is exactly what trainer Chad Brown wanted for his charge, and if the distance is not too much, then Highly Motivated will have the perfect setup to capitalize from post 17.

Hot Rod Charlie: I realize there was an audible cheer from his connections when he received post 9, but I do not see how this sets up favorably for him. In this spot, he is positioned between Medina Spirit and Midnight Bourbon. The former is quick from the gate and will use that speed to secure a forwardly placed position. Midnight Bourbon also is quick and has been training like he will send to the lead.

Hot Rod Charlie is not a “need the lead” type, but if he takes back there is a good chance he will have to check as Midnight Bourbon attempts to cross to the rail. Such a move would cost him valuable position and cause him to play catch up.

Soup and Sandwich: The son of Into Mischief likes to lead his fields from start to finish, but coming from the 19 will make that a very tall task.

To his inside are Rock Your World, Midnight Bourbon, Hot Rod Charlie, Medina Spirit and Mandaloun. All those horses have early speed, and three run their best races by leading the entire way.

Soup and Sandwich will need to be used hard from his 19 post to stay with those horses early and secure a spot near the front. That will hurt his chances of having enough left late to withstand an onslaught of closers that will get the perfect pace to close into.

Rock Your World: It already has been said numerous times that the Santa Anita Derby winner will not enjoy the same uncontested lead he received in his signature win. Breaking from post 15 inside of almost all the other speed all but assures that.

Just look at the setup Soup and Sandwich is going to get and apply that to Rock Your World – only he will almost assuredly be part of a 4-way pace duel.

Think 2010 Breeders’ Cup Classic. Sending hard and engaging in a pressured duel will all but ensure that Rock Your World, and anyone close to him, will be fading by the time they reach the top of the stretch.