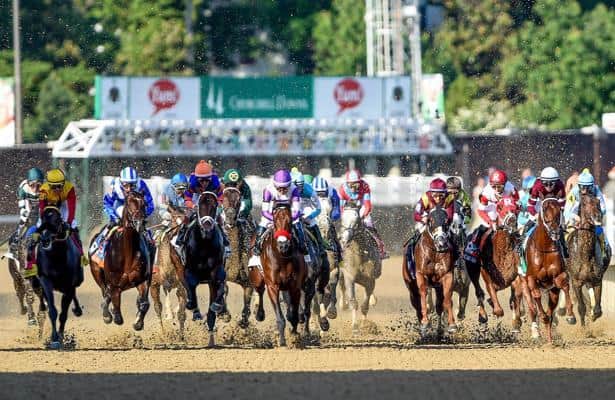 When it comes to the Kentucky Derby, it does not matter whether it’s run in May or September, there are always winners and losers in the draw.

This year is a little different with the debut of Churchill Downs’ new, single, 20-horse starting gate. The gate was made specifically with the Kentucky Derby in mind, since in prior years an auxiliary gate was used to make room for posts 16-20.

After a few close calls experienced with the auxiliary gate, where horses in posts 15 or 16 broke poorly and caused a domino effect to the rest of the field, Churchill Downs made the decision to eliminate the auxiliary gate in favor of a single 20-horse gate.

With that in mind, let’s look at the winners and losers, in order of post position.

1. Finnick the Fierce: This son of Dialed In likes to sit mid-pack, which puts him at a disadvantage since all the speed is to his outside and will look to make their way to the rail. In his races to date, he has not shown the necessary speed to out-foot those outside of him to the front. Another negative is that he has no right eye, which means he is unable to see all horses to his outside. That would be 17 others. Loser

2. Max Player: Another that will be at a disadvantage being so close to the rail. He is faster than the horse to his inside, but he is still a horse that wants to run mid-pack and will have to contend with a mad rush to get to the rail. Unless he can show a new dimension and show gate speed, he will be shuffled too far back to make a run for the win. Loser

3. Enforceable: This one has no early speed and will want near the rear. That is good for him, because with the number of horses looking to come over in the run to the first turn, that is exactly where he will be. Neutral

4. Storm the Court: He has not shown the ability to keep up with the first or even second string of his peers at any point of the race in 2020. The post does not hurt him, but it doesn’t give him an advantage, either. Neutral

5. Major Fed: In races where the pace has been moderate to slow, this one has shown the ability to stay closer to the pace. But this pace will not be slow, and with this position I see him trying to work out an inside trip from mid-pack. He is quick enough early that the task might be doable. Winner

6. King Guillermo: It took six spots, but a horse with speed finally shows up. The “King” couldn’t have asked for a better post. He doesn’t need the lead, but with a bunch of grinders and closers to his immediate inside, expect him to go right to the front and right to the rail. He should be able to work out a good trip with smooth sailing from this spot. Winner

7. Money Moves: It is hard to know what to make of this son of Candy Ride. He likes to stalk to pace, but with his highest-level win coming in an allowance, who knows whether he can cut it with the big boys? Nonetheless, this is a good post for his style and should afford him the opportunity to strut his stuff with a clear trip. Winner

8. South Bend: A stone cold closer that grinds his way up to minor awards will not see a benefit or negative from this post. Neutral

9. Mr. Big News: With a wet track and fast pace, he might have a shot to get up for minor awards, but on fast track he has proven too slow to make an impact here. He will want to drop toward the rear in the early stages. This post should not hinder that. Neutral

10. Thousand Words: The winner of the Shared Belief Stakes in his last outing will be looking to be involved in the early pace. He does not have many to his inside that will cause him to get hung wide, which should prove helpful. Winner

11. Necker Island: This one likes to stalk the pace, but from this post, with quicker horses inside and outside, I see him getting shuffled out of his preferred spot. Loser

12. Sole Volante: This one will be sitting mid-pack, but with this post, he will likely get hung wide unless he goes out of his comfort zone to take farther back or get used at the start. Either way not a great setup in a race of this caliber. Loser

13. Attachment Rate: When the pace is moderate, this one can sit within striking distance, but with so many pressers and pace horses in this, the chances of a moderate pace are slim. He will likely get hung wide as part of the mid-pack group. Loser

14. Winning Impression: This one likes to come from the back of the pack, so his post position will not really affect his running style. He might be caught wide, but judging from his PPs, he was outclassed to begin with. Neutral

15. NY Traffic: This one likes to be a part of the pace early on, but in this spot, I don’t see him getting a favorable trip. Tiz the Law and Authentic are just a couple spots over and will seek to gun from the gate to ensure they do not get hung too wide. There is also speed a few posts to his inside. If he does not get sandwiched or checked early, he’ll likely be a few more lengths off the pace than he’s used to. Loser

16. Honor A. P.: Of the horses that want to run mid-pack, he is the best. Unfortunately, he is also likeliest to get the widest trip of all. There is little doubt he can run all day but giving up a solid amount of ground to horses like Tiz the Law, Authentic and King Guillermo will make it more difficult to win. Loser

17. Tiz the Law: Everyone is making a big deal of the 17, when in reality, he will be breaking from the 18 stall, since the 1 and 20 stalls will be left open. While I am not thrilled with this post, the horse has enough tactical speed to work out a trip. The other plus is that he will get a clean trip. Favorites have broken from outside posts and were able to work out winning, albeit wide trips in the past. Winner

18. Authentic: Before the draw he was the speed of the speed. Now, he is really going to have to work to cross over and get the lead. There is a chance he’ll use the post to lay just off the leaders, especially since there are so many speed/presser types in here. However, he still has a high chance of getting hung wide, while also trying to keep up with a solid pace. With distance still being a concern, this is not a favorable post. Loser