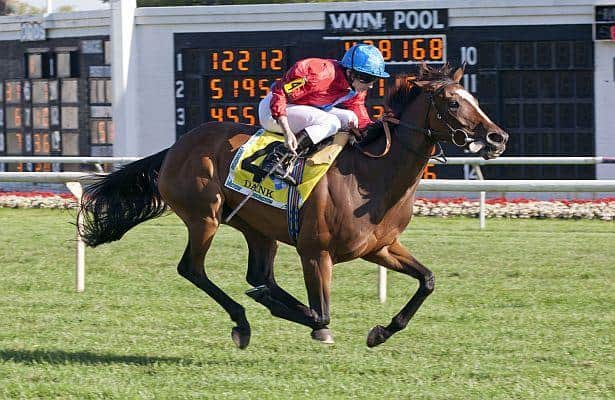 On a sunny day in Chicago, it was Dank who shined brightest when establishing a new course record in the Beverly D. Stakes (Gr. I). Trained by Sir Michael Stoute, the 4-year-old daughter of Dansili rated kindly in 6th down the backstretch, advanced steadily entering the far turn passing rivals one by one and kicked clear down the lane for a decisive 4 ¼ victory. She completed the 1 3/16 miles in 1:53.38, a stakes record, while rewarding her backers with a $8.40 win mutual, and owners Hernandez Racing Club $436,500 for the resounding victory,

Gifted Girl saved ground on the rail and swung out at the top of the lane to complete an all-European exacta. “We had a lovely run around. She was slowly away, but she ran a super race. There’s still more to come for her,” jockey Thomas Queally.

Though 20-1 long shot Ausus checked in another 1 ½ lengths behind, trainer Dan Peitz was thrilled with his filly’s effort. “We are happy! Third in a grade I. We’re ecstatic with that. We had confidence in her. She was farther back than I expected. He didn’t want to be five-wide on the urn, so he had to drop all the way out the back. Then she came with her run at the end. I’ve said all along, I think she’ll run farther. I think a mile and a quarter to a mile and three-eighths will be better for her. I would love to see that.”

The real surprise of the race was the dull performance delivered by favorite Marketing Mix. Previously 2-1-1-0 over the course and sent off at $1.10-1, Marketing Mix checked in a disappointing fourth, after stalking in 3rd behind the quick early pace set by La Tia. “She was pulling and not settling like she normally does. She was comfortable, but she was pulling which took away from her kick. Normally she gives me a real feeling of confidence, but she didn’t give it to me today. I knew a ways out it was going to be difficult,” said jockey, Gary Stevens.

No plans have been made yet for sending Dank back for a try in the Breeders’ Cup Filly & Mare Turf, but if so she would have top billing based on her brilliant victory today in the division’s toughest race of the year to date.