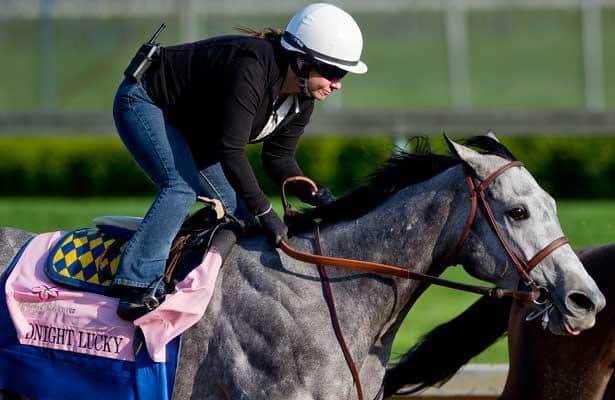 On paper, this is a 2-horse race. #1 Magic Union & #2 Liberated appear to be the only 2 runners with any early speed, neither of them back up down the lane and both own a speed figure edge over their rivals. I’ll lean toward Magic Union due to the higher odds, but a victory by Liberated would not be a surprise. #3 Assets of War is 2nd off the layoff, sports a new pair of blinker and retains jockey Shawn Bridgmohan. Combine those factors with his snappy 37 1/5 workout on 4/30 and he looks best of the rest to complete the trifecta.

With the abundance of early speed #4 Allegheny Angel should get the hot pace she needs to set up her late kick. Allegheny Angel moves to the main track after debuting on turf at Keeneland on 4/13. That day she closed furiously into a slow pace just to fall a nose short. Leparoux retains the mount as well, so a repeat effort should be expected. In addition to being my home state, #3 Kansas is a very consistent sort who takes the blinkers off for his first route try. Trainer Wesley Ward is 29% with 2nd off the layoff horses, the red-hot Joel Rosario stays on and when these 2 hook up over the last 60 days, their win percentage is 38%. #7 Cora Mesa is another closer who loves to hit the board (9-0-3-4) and should be included in all trifecta plays at a big price.

In a wide open race, #3 Kaminari is making her turf debut and is by Bartok’s Blithe, who had success on both turf and dirt. Kaminari had a good 6 furlong turf workout (1:15 2/5) on 4/23 to set her up for today’s race. #4 Moment of Majesty is making her first start of the year while moving to the Andrew McKeever barn. Though this race may be a tune up, her speed figures against these make her a must include. #8 Noble Charlotte is a longshot that likes to hit the board (19-4-9-2) and could sweeten your exotic plays.

#3 Speedinthruthecity has been facing the best 3yo fillies in the country, so a little class relief is welcomed. 3 workouts spaced 7 days apart for a trainer (Asmussen) that is 25% 3rd off the layoff hints that she will be primed to deliver a top effort. #1 Sweet Shirley May cuts back to sprinting and is a logical contender for the potent Ward/Rosario team. Though her last 2 have been allowance company, the winners of those races are entered in the Kentucky Oaks (Close Hatches & Flashy Gray). #8 Love Train was hooked in a speed dual last out when falling a nose short to next-out winner Wildcat Lily. It should be noted that trainer Steve Klesaris does not keep a string of horses in Kentucky, so deciding to run here should carry extra weight.

#9 Storm Crossing is out of the turf stakes winner Storm Alert, who has 6 winners in 7 foals (3 turf winners).Though her workouts a somewhat spotty, this race is wide open and taking a fresh face for a high percentage barn is not the worst thing. Jockey Miguel Mena elects to hop aboard #7Artful Lady, even after riding #10 Strike Charmer to a 3rd place finish in her debut last out at Keeneland. Artful Lady broke slow and closed with a rush when debuting in a turf sprint at Fair Grounds on April 6th. Expect an improved effort at a big price on the stretch out. #8 Bail Me Out has not run since last June, but her owner/trainer (Ramsey/Maker) get their horses to peak during this weekend. With 6 board finishes in 7 starts, Bail Me Out is a bet against in the win pool, but must be included in all exotics.

On paper it appears 2012 Kentucky Oaks winner Believe You Can and On Fire Baby (Apple Blossom winner last out) will dominate this field. Both need the lead run their best, so a hot dual could develop. #3 More Chocolate looks to be the beneficiary of the potential speed dual, and can upset at a fair price. If a speed dual does not materialize, #4 Believe You Can may out quick On Fire Baby due to her inside draw. #2 Authenticity is a 6-year-old with only 6 starts, but is on the improve after being away from the races for some time. She could pick up a minor award if the pace should collapse.

In a wide open race #3 Kitten’s Dumplings returns to her preferred surface and will have plenty of pace to run at. Trainer Mike Maker is 18% 2nd off the layoff, so expect an improved effort even though she earned a career best BRIS rating of 92 last out. #6 Private Ensign is a regally bred daughter of A.P. Indy who debuts on the lawn today. With 3 turf works this year it appears that trainer Dale Romans has had a surface switch in the back of his mind for awhile. #9 Toyko Time rallied into a snail’s pace last out (6 furlongs in 1:15 4/5 and rates as a logical contender with a more beneficial trip today.

#14 Calistoga has dominated in 2 career starts, and with a perfect outside post it looks like she will remain undefeated. Trainer Bill Mott is not known for precocious horses, so with her early success the sky’s the limit.  The undefeated #3 Blueeyesintherain is 2-for-2 over the strip and won her seasonal debut at Oaklawn Park impressively. Trainer Garry Simms has a small barn but high strike rate in graded stakes (25%) and with runners 2nd off a layoff (20%). #11 Dancinginthecircle cuts back in distance for ill-fated Eight Belles trainer, Larry Jones. He and his wife Cindy have come close to winning this race numerous times in honor of their beloved KY Derby runner up. Last out in the Fairground Oaks, Dancinginthecircle set a wicked pace before yielding late, so the return to sprinting will be much appreciated. 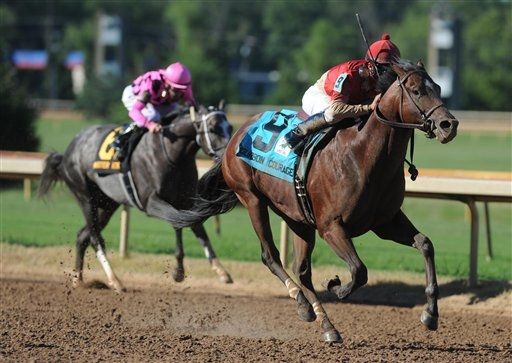 #8 Bourbon Courage was pace compromised in his last 2 tries, has been working steadily for this spot and excels when 2nd off a layoff, as evidenced by his 5-length victory in the 2012 Super Derby. With the projected quick pace provided by Laugh Track, Right to Vote and Take Charge Indy, expect another strong effort from the rising star. #7 Macho Macho was a respectable 4th in the New Orleans Handicap after a 6-month absence. Nakatani was aboard for an allowance win last Derby weekend and retains the mount today. His closing kick should be more pronounced after knocking off the rust. #4 Hymn Book has lead me on a wild goose chase the last nine months. Again, he is an obvious contender but looks to play the role of bride’s maid once again.

In a very contentious race, #12 Redwood Kitten has to overcome a wide post, but appears to be lone speed as long as he can out foot #1 Anyriderill Do early on. Last year, Silver Max won this race in similar fashion while drawn outside. #4 Noble Tune’s only defeat came in last fall’s BC Juvenile Turf. He has worked well and been pointed to this race for months, so he will deliver a good effort. The question that must be answered is will there be enough early pace to set up his powerful late punch.  The aforementioned, #1 Anyriderill Do is making his stakes debut, but gets a favorable draw and pace set up. Be sure to include in all exotics as a horse to outrun his odds.

A scorching early pace is expected and #2 Midnight Lucky, who has done nothing wrong in 2 career starts, should sit right off it. She has worked better than any Oaks/Derby entrant this week, so a peak performance is expected. #8 Dreaming of Julia is an obvious win candidate with her 21 ¼ length romp in the Gulfstream Park Oaks. She has had 3 solid works over the CD strip in preparation for this and also appears as if she will lay just off the pace and get a jump on the deep closers. #5 Seaneen Girl is a graded stakes winner over the track, and has only 1 start this year, in which she was a fast closing 3rd in the Fairground Oaks. She too has worked steadily for this and should improve 2nd off the layoff with the added distance and a quick early pace.

#3 Delilahjane & #8 Greek Life both hail from the Steve Margolis barn and encountered trouble in their career debuts. It’s tough to choose between the pair since they were only separated by ¾ of a length last out. Both jockeys were encouraged enough to stay aboard today, so look for one of them to be in the winner’s circle. #11 Sky Girl was a wide running 3rd in her debut at Keeneland. She gets an extra furlong and Lasix for today’s run. Though trainer Paul McGee is only 9% with second time starters, Sky Girl had a nice 5 furlong workout 6 days ago to prime her for today.