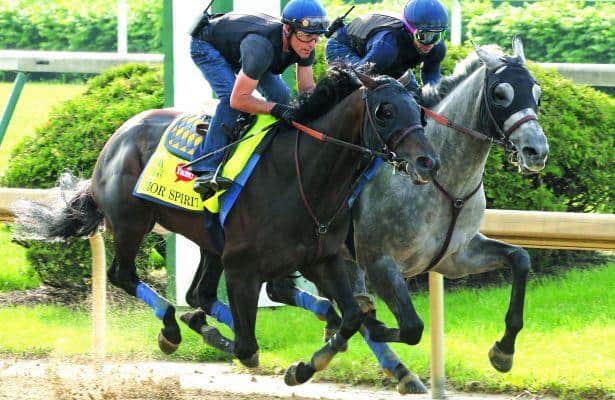 The country’s best turf miler (male or female), #1 Tepin, puts her 5-race winning streak on the line as she attempts to defend her title in this race against 8 overmatched rivals. Look for her to sit a perfect trip behind the early speed of #4 Isabella Sings and #8 Zipessa. #9 Rainha Da Bateria adds blinkers for her first start in the Chad Brown barn. 3 back she fell ½ length short to Isabella Sings over the course, when the latter set a controlled pace. With the added pace, she should round out the exacta.

DRF Bets is the place to play the Kentucky Derby

On paper there isn’t too much early speed in here, so I’m settling with #5 Limousine Liberal, who set the track record at 6 ½ furlongs at Keeneland last out in his first race of the season. The four horses inside of him are closers, so look for him to break sharply and secure a good position on the rail while setting a moderate pace. #6 Speightster had the look of a superstar in his first three starts, but he’s been sidelined since last July. The main question is how tight has Mott tightened the screws for this, especially with the Met Mile on the horizon in 5 weeks. #4 Barbados was uncharacteristically placed near the front last out. He should improve second off the bench when rallying first of the closers.

Last time #8 Taris was seen at 7 furlongs, she was hampered while dueling along the rail in the BC Filly & Mare Sprint. She ran fantastic to be third that day, but with her cutting back in distance and drawing near the outside, Taris should get a great stalking trip behind the speed of #1 Sarah Sis, #2 Stonetastic and #5 Super Saks. With the early speed signed on here, look for the logical closers #10 Wavell Avenue and #9 Birdatthewire to round out the trifecta.

Other than the Derby, this is easily one of the most contentious races of the day. If you’re playing multi-race exotics, make sure you can use as many as your budget will allow. There doesn’t appear to be an abundance of early speed, so I will lean toward #4 Beach Patrol as my top selection. Since moving to the Peter Miller barn, the 3-year-old son of Lemon Drop Kid has shown some versatility by winning his last 2 starts from on and off the pace. Last out, he ran the final 3 furlongs in 34 4/5 seconds, showing his has the ability kick for home without needing the lead. #3 Converge makes his 3rd start off the layoff for Chad Brown, who hits at 24% with those types of runners. Jockey Javier Castellano rode 3 of the starters last out and lands here. #10 American Patriot only has a maiden victory to his credit, but easily owns the best late pace figures in the field and must be included in all exotics for Pletcher.

#11 American Freedom is the least experienced runner of the bunch, with only a smashing debut victory over a sloppy track at Santa Anita going 7 furlongs on his resume. That day the Baffert trainee sat off a quick pace and powered home, hinting that the added furlong won’t be a problem. #7 Forevamo was an also ran on the Louisiana path to the Triple Crown trail. In his only start at CD last fall, he was runner up to Derby starter Tom’s Ready at 7 furlongs. #1 Discreetness also tried to make a run for the roses and finds himself against much easier competition today. With an abundance of early speed entered, look for him to unleash a furious rally and be a late factor.

This race comes down to whether or not you believe #6 Slumber and #12 Big Blue Kitten are ready to fire fresh off the bench after making their last starts in the Breeders’ Cup Turf back in November. I happen to think Chad Brown will have them both ready to fire. Though the records don’t bear it out, I think Slumber is a little more versatile with the addition of blinkers and therefore, better at 9 furlongs than his stablemate. #8 Divisidero looked like a winner at the top of the stretch last out, but hung a bit. With all the early speed in here look for him to run on late for a piece, while being a notch below the top 2.

This is the moment we’ve all been waiting for since American Pharoah completed Racing’s first Grand Slam. While there are no world beaters in here, this year’s Derby has the look of one of the most competitive versions of the 21st century. Nyquist is looking to be the first undefeated 2-year-old champ to win the Derby since Smarty Jones, and the 2nd horse to pull off the BC Juvenile/Derby double (Street Sense). Though Nyquist will be a strong favorite, his 2-turn speed figures are light, and he looks very vulnerable.

#17 Mor Spirit will attempt to be the first horse to win the Derby from that post. Back in 2001 Stevens and Baffert teamed up with favored Point Given from the same post, only to move too soon and run an even 5th, before going on to capture the last 2 legs of the Triple Crown. Of the runners who look like they will not have a problem getting 10 furlongs, Mor Spirit appears to have the most tactical speed, meaning he should get the jump on the deep closers. The Pennsylvania-bred son of Eskendereya has been used sparsely in his last few starts, and has been training well in preparation to peak on Saturday.

#11 Exaggerator easily handled Mor Spirit and #20 Danzing Candy last out in the Santa Anita Derby. That day Exaggerator sat way behind a sizzling early pace and made one run over a sloppy track that he’d already shown a liking for. While he is a major player, trainer Keith Desormeaux is on record saying that the plan is to fall way back early again. If this is the case, he will need some racing luck navigating the annual traffic jam that is the Kentucky Derby.

#14 Mohaymen had a flawless record before being soundly defeated by Nyquist in the Florida Derby last out. In that race Nyquist set an easy early pace, while Mohaymen was 6 wide in the first turn and 4 wide on the backstretch and 2nd turn. Lending credence to what we already knew: it’s next to impossible to win outside post 7 going 2 turns at Gulfstream Park. He owns some of the fastest figures in the field, and needs to answer the question of being able to handle the 10th furlong after his sub-par performance 6 weeks ago.

#3 Creator is one of 2 entries for newly named Hall of Fame member, trainer Steve Asmussen. A surprise winner of the Arkansas Derby last out, the late-running son of Tapit has worked well this week, but has shown an immature side too, while schooling in the paddock. The distance won’t be a problem for Creator, but the buzz created from 160,000 spectators could be his undoing if his mind isn’t on business. Be sure to visit the Plays of the Day section to see how I will play the Derby.