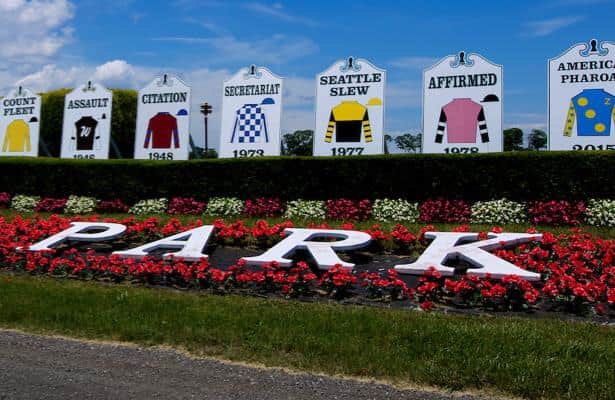 #1 La Moneda is the most versatile runner in the field and owns the best figures in the race. Throw out the last as she got in a torrid speed duel on the slop. #6 War Canoe owns the best late pace figures in the field, but this one-run closer is very pace dependent in a race that doesn't have a ton of early speed. #2 Hardly Mate at 10/1 is another late runner that is a cut below the top 2, but must be included in all vertical wagers.

Draw a line through #2 Mask’s last race over the sea of slop in the Pat Day Mile (G3) on the Derby Day undercard. The Chad Brown trainee was very impressive in his first 2 starts. He’s followed that sub-par effort last out with 3 solid works over the track, suggesting a bounce back is in order. #3 Rugbyman aired when breaking his maiden here on May 13 by 14 lengths in the mud. If he’s able to translate the figure he earned to a dry surface he looms the main danger to the top pick. #6 Breaking the Rules is stretching out after winning his first 2 starts at 6 furlongs. Breeding and his running style suggest the added distance will be no problem. Last out, he sat in the garden spot behind 2 front runners going head-to-head through quick fractions.

#7 Unchained Melody looks to get loose on the lead after American Gal opted to run in Friday’s Bed o’ Roses stakes (G3), while shedding blinkers. Expected a different trip today than her last where she chased quick fractions throughout off a 9-month layoff. #6 Able Tasman should improve off her first start of the year on the Kentucky Oaks undercard. The pace may not be to her liking, but when it isn’t Mike Smith has been known to move her into contention abruptly on the backstretch in a few of her races last year. #4 Pacific Wind is undefeated in 2 starts since moving to the Chad Brown barn, including a victory over the top pick last out. The competition is much deeper here, and the pace scenario not quite as favorable.

#7 Talk Veuve to Me is drawn beautifully outside in a race with a good amount of early speed signed on. Speed figures suggests she fits with these, but must answer the question of whether she can rate going 8 furlongs. #3 Monomoy Girl is the obvious choice but comes off a tough effort when winning the Kentucky Oaks (G1). Trying to catch the champ off her game when cutting back to one turn. #4 Gio Game has done no wrong in 2 dirt tries this year and her speed figures suggest that she's a solid contender at a big price.

#9 War Story won this in 2017 and looks very tough in this year’s version. There’s not much early speed signed on, so expect him to lay 2nd or 3rd and will be difficult to run down late. #3 Hard Study, versatile in his own right, won the local prep for this, and appears to be the only threat to the top pick on the win end. #2 Hoppertunity is a veteran that appears to have lost a step, but could clunk up and grab a piece of the superfecta.

Course record holder and defending champion, #5 Disco Partner loves Belmont (9 for 11 in the exacta) and the distance (6 of 7 in the exacta). He will only improve off his last where he caught a soft turf course while drawn outside at Keeneland. #7 Blind Ambition won stylishly last out at 7 furlongs in wire-to-wire fashion. He will sit just off the pace on the cutback, and will attempt to hold off the top pick late. #4 Conquest Tsunami is the speed of the speed, and needs to clear the field to be any type of factor.

The Kentucky Derby trail proved too tough for #12 Strike Power, but he is a wildly talented sprinter that will love the cutback and outside post. If it weren’t for the Todd Pletcher-trained National Flag, #3 Engage would be undefeated in 5 starts, but he will need to improve in the speed figure department to challenge the top choice. #6 Still Having Fun was one of the few horses to gain ground in the slop on Preakness day when he faced 3-year-old sensation Mitole. He must be used in all exotics when getting an extra furlong and a lively pace in which to close.

#3 Off Limits comes off a 3rd place finish to the top 2 finishers of the New York Handicap on Friday. She’s a course and distance specialist whose best races are over firm ground. #8 La Coronel had a troubled trip last out when wide over a wet course on Derby day. Expect her to lay closer to the pace and bolster the exotics. #7 A Raving Beauty was flashy in her US debut, but the speed figure came back light, and though a contender, looks to be over-bet.

#2 Bolt d’ Oro owns some of the best late pace figures in the field while being close to the pace in most of his races this year. He should be close to the early pace, get first jump on the deep closers and hold on for the win. #8 Ransom the Moon is also very versatile, but stretches out from sprints in California. #10 Awesome Slew is always in the hunt, but rarely seals the deal. He will be overlaid in such a deep race, but a must include in exotic wagers.

10 furlongs isn’t the optimal distance for #8 Sadler’s Joy, but with the projected hot early pace, look for him to swing wide turning for home and mow down the field in the lane. #3 Hi Happy is in career form, and a repeat of anything close to his last 2 efforts makes him a major player in here. #9 Channel Maker encountered trouble throughout the 2nd half of his last race. With a clear trip, he has a great chance to upset the apple cart at long odds.

#1 Justify has dominated his generation ever since setting foot on the track back in February. He is naturally faster earlier than all of these, and should set a moderate tempo unless someone forcibly gets put into the race from the onset. #4 Hofburg had a brutal trip in Louisville, and has been training great during his 5 week hiatus. #8 Vino Rosso appears to be suited for 12 furlongs, but looks a cut below the top 2. A dry track and 5 weeks off will help, but looks to be a grinder that should get a piece, just not the lion’s share.

#5 Snap Decision was checked multiple times down the backstretch and wide on the turn last out. Still keeps Jose Ortiz aboard and won in his only try at 9 furlongs. #3 Slim Shadey is a 10-year-old that is in career form. He bested the top pick in his last with a perfect trip, but the millionaire is winless in 9 tries at the distance. #1 Macagone is a wire-to-wire threat that hasn’t missed the board in 3 tries at today’s trip, but must not be hampered early to have any shot.

#1 Proven Reserves was very impressive in his debut at a mile, though only in a field of 4. If a speed dual ensues, that will be an added benefit for the Chad Brown charge. #3 Just Whistle is typically a stalker that found himself pressing the pace last out in the Peter Pan (G3). Look for him to once again lay off the pace and come running down the lane. #5 Grey Sky only has 2 wins in 37 starts, but loves to hit the board (37-2-8-11). At 12/1 morning line, this a perfect horse to help boost the exotics.