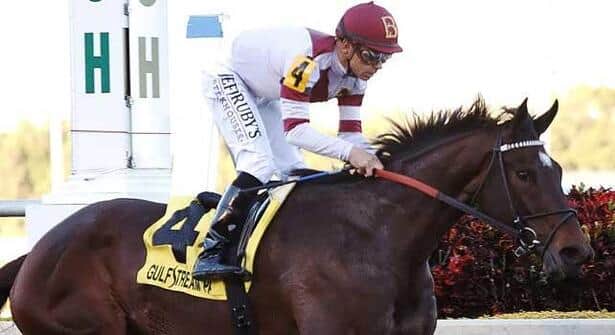 Photo: Arron Haggart/Eclipse Sportswire
Ajina, Theatrical and the legendary Cigar are just a few on the long list of great runners Bill Mott has trained over the last 35 years, but 2013 is shaping up to be the best yet. This seems tough to believe for 3-time Eclipse Award winner for top trainer, but if the Gulfstream Park meeting is any indicator, 2013 should be off the charts for Mott.
Best known for his development of grass runners and distaffers, Mott seems to have those bases covered thus far in 2013. Mott swept Gulfstream Park’s marathon turf stakes last Saturday with Starformer (G3 Very One Stakes) and rising star Amira’s Prince (G2 Mac Diarmada Stakes). On Sunday the barn’s big star, Royal Delta, made her seasonal debut by cruising to a 5-length victory in the Sabin Stakes. This should set her up perfectly to make her next start in the Dubai World Cup, and if all goes well she will attempt to match mighty Zenyatta as the only females to win the Breeders’ Cup Classic this fall.
Most would think Mott’s streak of 3 straight Breeders’ Cup Ladies Classic wins would end this year if Royal Delta runs in the Classic, but Mott appears to have some rising stars on the horizon to keep the streak going. 3-year-old fillies Emollient and Flashy Gray both made their seasonal debuts when winning allowance races at Gulfstream Park by open lengths. Both fillies are bred to get a route of ground, so the short-term goal of the Kentucky Oaks is very realistic. If Emollient or Flashy Gray can fill Royal Delta’s shoes, Mott could be in position to become the only trainer to pull off the BC Ladies’ Classic/Classic double in the same year, twice.
In most years, Mott has at least one runner make a splash in the male handicap division and this year is no different. Last year’s 3rd and 4th place finishers in the BC Classic, Flat Out and Ron the Greek, are back for 2013 campaigns. Though Flat Out’s performance in last weekend’s Donn Handicap was rather, well…flat, expect the 2-time defending Jockey Club Gold Cup champ to round into form once he moves north during the summer/fall. Ron the Greek made a stylish return to the track in 2013 when winning the Sunshine Millions Classic by 11 ¼ lengths and earning a Beyer Speed Figure of 115. The 6-year-old veteran is on track to defend his Santa Anita Handicap title next month.
Though not known for precocious runners, Mott revealed Calistoga and Close Hatches during the Gulfstream meet. Both 3-year-old fillies dominated their debut races displaying stakes quality, but the Kentucky Oaks would be very ambitious considering their lack of seasoning and with Emollient & Flashy Gray already in Mott’s holster.
Second only to D. Wayne Lukas in Breeders’ Cup earnings, Mott looks break that record, like many of his runners have over the years, if the last two months of the year are anything like the first two.
Calistoga Theatrical Ron The Greek Royal Delta Flat Out Starformer Cigar Amira's Prince Close Hatches Ajina Flashy Gray Emollient William I. Mott Gulfstream Park Santa Anita Handicap Breeders' Cup Classic Kentucky Oaks Dubai World Cup Breeders' Cup Distaff Santa Anita Handicap (2013) Breeders' Cup Classic (2013) Kentucky Oaks (2013) Dubai World Cup (2013)