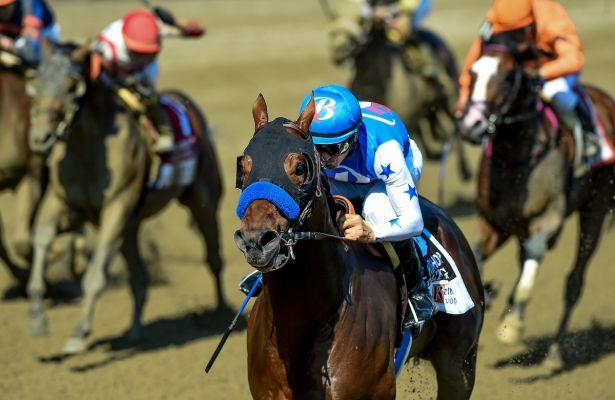 1.  1. Drefong - A runaway winner of the King’s Bishop (G-1) at Saratoga last month in his fifth lifetime start. The 3-year-old son of Gio Ponti recorded his first workout last week since returning from Upstate New York, so no plans have been divulged whether the Bob Baffert trainee will have a prep or work up to the race.

2. Lord Nelson - It’s an embarrassment of riches for Baffert with the top choice and the best sprinter on the West Coast. After trying the Triple Crown trail last year, Lord Nelson is undefeated in three sprint tries in 2016 with 2 against grade one company. A winner of 4-of-5 sprint tries at Santa Anita, Lord Nelson will make his next appearance in the Santa Anita Sprint Championship (G-1).

3. A.P. Indian - A virtual unknown to many until taking the Belmont Sprint Championship (G-3) on the Stars and Stripes card, he has stamped himself as the best sprinter in the East as evidenced when taking down both Grade 1’s for older sprinters at Saratoga (AG Vanderbilt and Forego Handicaps). Look for the Arnaud Delacour charge to make his next start in the Vosburgh (G-1) at Belmont.

4. Masochistic - He seems to be hitting his best stride coming into the Breeders’ Cup, but had things his own way on the front end in both starts this year. Before attempting to improve the last place finish in last year’s Sprint he will challenge Lord Nelson in the Santa Anita Sprint Championship.

5. Marking – Winless in two starts in returning from Dubai, the Godolphin import has run into two buzzsaws in Frosted and A.P. Indian. While no decision has been made to run in the Sprint or Dirt Mile, his best shot will be in the Sprint.

6. X Y Jet - He was the country’s top sprinter for the first half of 2016, but went on the shelf with a knee chip following his runner-up effort in the Dubai Golden Shaheen in March. He’s back on the work tab at Monmouth Park and expect Jorge Navarro to train him up to the race.

7. Economic Model - A late-running runner up in the King’s Bishop, the Chad Brown trainee looks to have found his best game sprinting, after trying some routes earlier this summer. Look for him to try older horses for the first time in the Vosburgh Invitational (G-1) at Belmont Park on October 1.

8. Summer Revolution - Fourth in the King’s Bishop (G-1) at Saratoga last month, in only his third career. Sprint may not be the goal with his next start slated to be the Pennslyvania Derby (G-2) at Parx, but look for him to improve with every start, and if he lands in the Sprint, he could be very dangerous on the cutback.

9. Kobe’s Back - The late-running grey son of Flatter will try to do his best Lit de Justice impression, but he will need a very fast early pace to make an impact. While he hasn’t been off the board in 4 starts this year, the Lakers namesake does his best running at 7 furlongs.

10. Runhappy - Last year’s winner and divisional champion hasn’t been seen since the Malibu Stakes (G-1) over the Santa Anita surface on December 26. Runhappy’s team has different goals for him in 2016, but look for them to call an audible should the one-mile Ack Ack Handicap at Churchill Downs on October 1 prove to be too far for him.