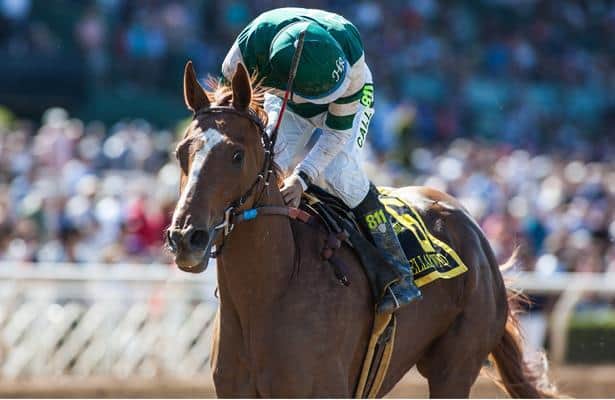 A common theme throughout my selections regarding the grass races is the Europeans will dominate. The crop making the trip is vast and contentious from top to bottom. The two favorites for the Juvy Turf, Cymric and Hit It a Bomb drew horrible posts (13 and 14), so I’ll tentatively go with #4 Shogun from the powerful Coolmore/O’Brien team. Last out he was only a 1 ½ lengths behind Cymric in the Prix Jean-Luc Lagardere, so the advantageous draw will help close the gap. Cymric and Hit It a Bomb are both very talented and must be used on all exotics, but need to overcome the post draws. #8 Airoforce is the best of the American runners. He owns a win over the course from the 13 post and is proven over yielding turf.

#3 Liam’s Map looks to be the speed of the speed, cuts back slightly in distance and has a favorable post draw. Even if someone runs with him early, he’s shown that not afraid of a fight when winning the Harlan’s Holiday earlier this year at Gulfstream.  #5 Lea was originally scheduled to contest the Turf Mile, but this week’s constant rain had trainer Bill Mott thinking otherwise. Lea should lay about 4thin the early going and will get first jump on the deep closers. #1 Red Vine beat Classic contender Honor Code last out at a mile and #8 Wicked Strong was runner up to Tonalist in the Jockey Club Gold Cup. Both will come running late and need to be used in all vertical exotics.

In a wide-open race loaded with early speed, #3 Alice Springs will be flying late and should enjoy the added distance.  Two back she was a late running 4th when finishing behind #10 Illuminate, who was laboring late at 6 furlongs. #8 Harmonize displays more versatility than any runner. In her first 2 starts at Saratoga she was forwardly placed, while last out she was wide and closed like a freight train to capture the Jessamine Stakes (G3) over the course. #11 Pricedtoperfection only has a maiden win to his credit. The Chad Brown trainee has closed well into pedestrian paces in both career starts. A great longshot to include in wagers given the projected fast early pace.

#1 I’m a Chatterbox has been a model of consistency all year, while improving with each start. She is drawn favorably and will get a beautiful stalking trip behind the handful of front runners signed on for this. Clocker reports this week indicate that she couldn’t be coming into the race any better. #9 Stellar Wind was a troubled 4th in the Kentucky Oaks, which coincidentally was the last race she had a reasonable pace to run into. Her last few starts are better than they look on paper, as she was forced to chase a slow pace. Look for improvement off her last few with the added early pace and distance. #12 Got Lucky won the local prep over this course. The late runner will also benefit from the early pace scenario. The post draw is the only concern for the Todd Pletcher trainee.

Please be sure to visit The Play of Day section for my play in the Breeders' Cup Distaff.