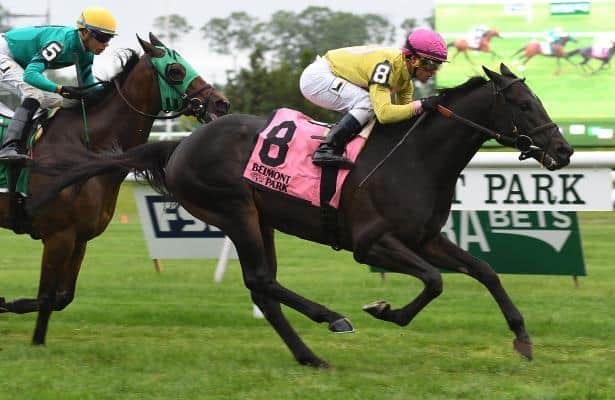 While there is no Wise Dan, Gio Ponti, or Steinlen in the 2017 rendition of Keeneland’s Shadwell Turf Mile (G-l), a full field of 14 is lining up for the final 'Win and You’re In' birth to the Breeders’ Cup Mile (G-l) next month at Del Mar.

Regardless of who moves on to the Breeders’ Cup, they will be a longshot when they enter the gate against the world’s top milers, but that doesn’t mean this Saturday’s race won’t be one of the best evenly-matched betting races of the year.

1. Tyler U (50/1) enters off of only five career starts, with only one of those being a route. This is a pretty ambitious spot to make a stakes debut.

2. 2. Divisidero (9/2) appears to be a Churchill Downs specialist as evidenced by his back to back wins on Derby day in the Woodford Reserve Turf Classic (G-l). He’s never won over this course or distance, but expect him to be a late threat.

3. Suedois (15/1) has faced Europe’s best sprinters the last few seasons with moderate success. Last out he was able to last the eight furlongs against group company. He’s a definite contender in this field.

4. Le Ken (30/1) is a Argentinean import that never has been out of the exacta in his home country. In his lone U.S. try he was troubled fifth against California’s top milers. Expect improvement and could upset at huge odds.

5. 5. Dimension (20/1) is a nine-year-old gelding that appears to have lost a step. This might be one last hurrah before a life of leisure back at the farm.

6. 6. Ballagh Rocks (10/1) appears to improving with every start. His last 2 at a mile were great, but both over yielding courses. If able to improve off his fourth place finish in the Maker’s 46 over this course in the spring, he could find himself in the winner’s circle.

7. Mondialiste (4/1) grinded out a fourth place finish last out in the Woodbine Mile (G-1) against America’s best chance in the Mile, World Approval. Though he will garner plenty of support due to the performances he’s turned over this course in the past, it looks as if his best races are behind him.

9. Flatlined (20/1) is in improving form, but looks overmatched against these. Hasn’t hit the board in two tries against allowance company over the course, so expect a fourth place finish at best.

10. Heart to Heart (7/2), the likely favorite, is only lacking a Grade 1 victory to his résumé. While he looks to be the speed of the speed, expect others to be tracking him closely early on.

11. Christian C (50/1) the Illinois-bred is over his head against these. Trainer Catalano would be better served to look for a softer spot at Hawthorne this weekend.

12. Offering Plan (15/1) is a late-running outsider for the always dangerous combo of Chad Brown and Javier Castellano. Look for him to running fastest of all in the final stages to hit the board.

1  13. Applicator (30/1) appears over matched against these, though coming off an upset victory at Kentucky Downs over Flatlined.

14. American Patriot (15/1) is undefeated over the course and took down the Maker’s 46 this spring. He looks to have lost his best form since a summertime trip to England, and the outside post won’t help his cause either.