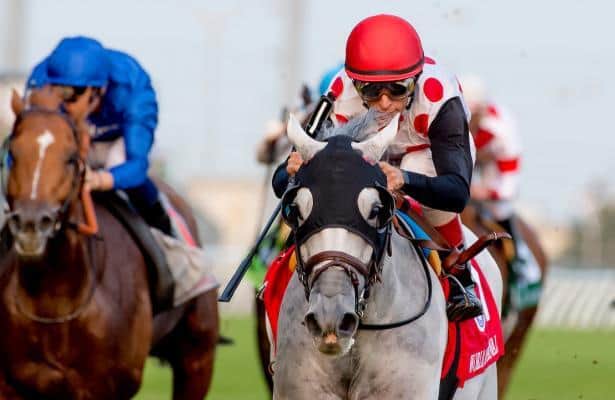 The Breeders’ Cup Mile is usually one of the more wide-open races over the 2-day World Championships, and this year’s version set for Nov. 4 Del Mar appears to be no different. Favorites have won 11 of 33 running of the event, while 10 winners have scored at odds of 10-to-1 or higher.

As in the past, expect a full field of 14 with numerous also-eligibles on the waiting list hoping to draw into the field. While Europe tends to have an edge on the domestic stars in this event, the Yanks have been on a roll lately taking five of the last six editions of the turf test.

Here's an early look at the field with odds by Horse Racing Nation. Also check out need-to-know tips for betting the Mile.

Ballagh Rocks [30/1 – Stormy Atlantic – Bill Mott - 14-5-2-3 - $526,910] Comes off a solid 3rd-place finish in the Shadwell Turf Mile (G1) last weekend at Keeneland. Though appearing overmatched, he is on the improve for the trainer who took last year’s Mile with Tourist.

Decorated Knight [15/1 – Galileo – Richard Charlton – 18-8-4-1 - $1,786,522] Has faced Europe’s best all year but hasn’t raced at a mile since April of 2016. Rates a decent shot according to European oddsmakers, but fancy other Euros going eight furlongs. It would not be a surprise to see him in the Breeders’ Cup Turf instead.

Ribchester [4/1 – Iffraaj – Richard Fahey – 14-6-4-3 - $3,131,784] Is the likely race favorite and undoubtedly Europe’s top miler. The 4-year-old has taken three Group 1 races at a mile this year and is expected to start in the Queen Elizabeth II Stakes next Saturday at Ascot. Have to worry that two races in two weeks on two continents could take their toll.

World Approval [6/1 – Northern Afleet – 23-10-2-4 - $1,933,450] The final 'WAYI' entrant by winning the Woodbine Mile. He has flourished after cutting back from marathon distances. Look for the versatile grey to be in the thick of things turning for home.

Yoshida [20/1 – Heart’s Cry – Mott – 7-3-3-0 - $549,100] A Japanese-bred that has emerged on the scene with wins up and down the Eastern seaboard this season. While the future is bright for this youngster, don’t be surprised if Mott plays it conservative and puts him away until next year.

Zelzal [30/1 – Sea the Stars – Jean-Claude Rouget – 9-4-1-1 - $476,746] A lightly raced 4-year-old that has turned in some good efforts against top company while not finding the winner’s circle. This could be the longshot that adds to list of double-digit winners.

Dubyuhnell fights hard in stretch to outlast Remsen rival
Dubyuhnell dug in gamely down the lane to outfinis...
x