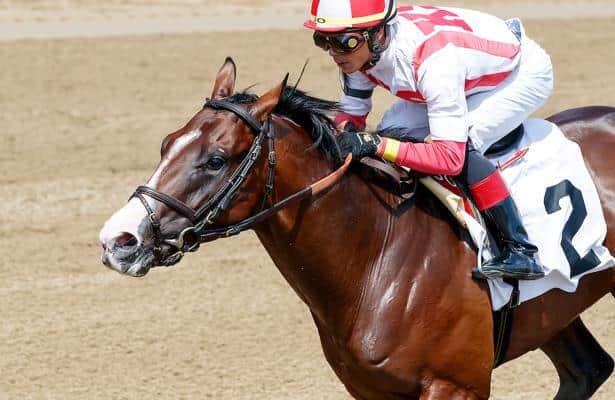 First post on Breeders' Cup Friday at Churchill Downs is 12:55 p.m. ET. The stakes action begins with Race 4 and runs through the end of the card. Here's a look at my top selections for each event:

This race for 2-year-olds hoping to hit the Kentucky Derby trail is loaded with speed over what appears to be a wet track. You’ll want to take notice if the track is speed-favoring or tiring as it dries out throughout the weekend. #8 Louder Than Bombs has only raced on grass, but he's bred for the main track and can handle this distance. He’s a great price to get the weekend started off right. #2 Improbable hails from the Bob Baffert barn and stretches to a mile. He’s trained forwardly for this while retaining the services of Drayden Van Dyke. #5 Moonster cuts back to one turn after facing Grade 1 company last out in Keeneland's Breeders' Futurity. Bred for the mud and will sit a nice mid-pack trip at a price.

#8 Sergei Prokofiev was ultra impressive last out at Newmarket over five furlongs. Victorious in his only try on wet ground, the son of Scat Daddy has an electrifying turn of foot that should be amplified by the amount of early speed signed on here. #12 Pocket Dynamo was behind the top pick last out off a three-month layoff. Expect improvement as he won his only effort second off a layoff. #2 Soldier’s Call finished third against older sprinters in a Group 1 event. With that on his resume alone, he should be a stand out, but not sure how his European early speed will translate against Americans.

#6 Newspaperofrecord dwarfs this field from a speed figure standpoint. She’s a strong candidate to take the field wire-to-wire at short oddsas in her two prior starts. #1 Concrete Rose is flawless in two starts as well and showed great tractability going a route last out. #9 Varenka is still a maiden, but stakes placed twice. She's a must-use in all exotics at long odds.

Another race with many “need the lead” types, the Juvenile Fillies features #8 Sippican Harbor, who has shown the most versatility in her dirt races of the lot. After wiring a field of maidens by 17 lengths, she came from out of the clouds to take the Spinaway Stakes (G1) at Saratoga. She must answer the question of if she can handle two turns. #4 Restless Rider added Lasix and took down the Alcibiades (G1) last going a route of ground at Keeneland. She will be a square price for a runner that shows up every time. #10 Bellafina will go favored, but could be a casualty of a hot early pace with her outside post, making her a beatable favorite.

#5 Line of Duty won over soft going last out at nine furlongs in France. Don’t think he’ll be the 10-1 that he’s listed at on the morning line, but still think half of that would be decent on a runner that can handle the distance, wet turf and has never finished out of the exacta. #14 Anthony Van Dyck has a tough outside post, but has faced the toughest competition by far. Some European book makers have him as low as 2-1 for this. Undefeated over yielding turf and going a mile, he must be included in all multi-race exotics. #2 Uncle Benny closed strongly at six furlongs last out over good ground. He’s bred to stretch out, and his inside draw helps save ground, which is critical in a full field with plenty of traffic.

In another race that appears to have a lot of front runners, #6 Complexity looks to be the speed of the speed. He owns the quickest early pace figures, and his late pace figs stack up well against these. Believe he will win the game of catch me if you can against this bunch. The morning line favorite, #9 Game Winner is best in the West and looks to sit a nice stalking trip should the speed fall apart. #8 Standard Deviation is the stablemate of the top pick. He was wide and closed best of all into a slow pace last out. Adds blinkers and is a must use in all exotics at double-digit odds.

For a 1 1/2-mile race, there is quite a bit of early speed in here. #10 Rocketry is a long-distance specialist that likes to run from off the pace. A repeat of his last will land him in the winner’s circle. #7 Big Dollar Bill took a listed stake at Saratoga over the trip in August. Trainer Ian Wilkes looks to have him on ready to fire his best shot after his most-recent workout. #8 Honorable Duty may find the distance difficult, but is a Churchill Downs specialist that must be used in all exotics.

Prospect Watch: 4 to follow at Ellis and Los Alamitos
Racing at Churchill Downs and Santa Anita is on hi...