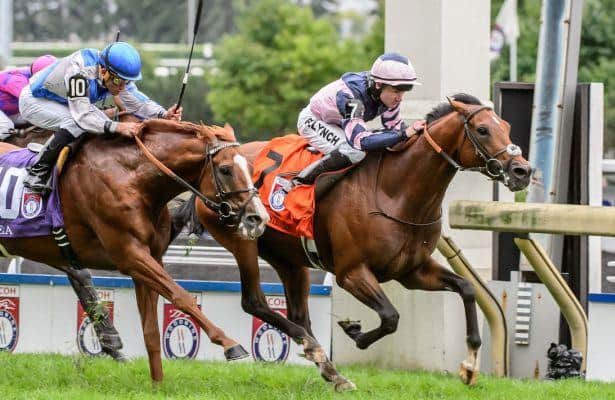 I will be on-site at Arlington and hosting a live chat throughout Arlington Million day starting at high noon, so be sure to stop by and share who you like to win some of the country’s top turf races!

Early speed played very well on the main track Friday, but with so many confirmed front runners in the Million Day opener, late runners will make an impact. #4 Ms. Zenergy was finishing best of all versus many of these last out while encountering traffic trouble in the stretch. #7 Read to Me bested the top pick last time when saving ground along the rail throughout. Look for her to get first run into the projected hot early pace. #2 Velvet Zip drops to the lowest level of her career while making her Polytrack debut for the powerful combo of Midwest Thoroughbreds and Roger Brueggemann.

#1 Dynamic Decision returns from a 6-month layoff and owns an early-pace advantage over this evenly matched group. #4 Cruachan holds the best late pace figures in the field and is proven oven turf courses with give in them. #3 Mendota isn’t the most reliable runner to reach the winner’s circle, but is always in the hunt with 9 runner-up finishes from 29 starts.

#2 Cartoon fell a nose short at this level last out over a yielding course. He should get first run on the deep closers behind the contested early pace set by #1 and #3. #6 Five Green Stars is consistently the fastest of the bunch in the last quarter mile, but usually leaves himself too much to do as time runs out. Must be included in all exotics at a square price. #4 West Village is another who will be moving very late, but doesn’t offer much value for his running style against these.

#4 Poker Player isn’t a win machine by any stretch, but hoping the addition of blinkers sets him apart in a group that enjoys beating one another. #6 Ghost to Ghost drops in class, but only sports 1 win in 23 grass starts. Just another that should be used in a wide-open race. #3 A Nice Slewish Boy hasn’t been seen since June, but always comes with an honest effort and is very formidable whenever he drops to the 10K level.

#3 Runningfromthefeds should make an uncontested lead and take the field wire to wire. He’s already proven over the Polytrack, and the cutback from 9 furlongs is a perfect stamina builder for today. #2 Pilot House faced Cupid last out and faded badly in the stretch of the Indiana Derby (Gd. 2). His turf win 3 back suggests he can handle Poly, but is still unproven over the surface. #8 Michael J. is the longer of the 2 Mike Maker entries, but his running style fits the way the track has been playing while picking up the red-hot Geroux to ride.

#8 Clondaw Warrior is a lightly-raced veteran, as the 9-year-old only has 19 starts, but has been competitive in some of Europe’s premier marathon races. Though not in all past performances, Clondaw Warrior tuned up for this with a victory over the jumps in a stakes at Galway on July 26th. #5 Da Big Hoss is a deserving favorite after taking the 2-mile Belmont Gold Cup last out. This will be a jump in class as the 5-year-old son of Lemon Drop Kid will finally be tested by Europeans at a marathon distance. #9 Messi has been facing the likes of Flintshire, Ironicus and Heart to Heart, so while he’s dropping in class, he must prove himself around 3 turns.

#8 Long Island Sound disappointed as the favorite in last month’s Belmont Derby (Gd. 1). That day the O’Brien trainee was shuffled back on the final turn and encountered some traffic trouble in the stretch.  Jockey Heffernan is undefeated on him in 3 starts, and look for him to continue that streak. #9 Beach Patrol was wide throughout against the top pick last out. He’s a serious win candidate, as evidenced by his last 3 workouts, for the powerful Chad Brown stable. #2 American Patriot has shown a new dimension with the addition of blinkers. Though no threat to the top 2, he must be used in all trifecta plays.

Owner Martin Schwartz has won the Beverly D. 3 times and is on record saying #13 Sea Calisi is the best horse he’s ever owned. After racing at the highest level in Europe, she’s batting 50% in the states. Last out she got stuck behind traffic and a slow pace in the New York (Gd. 2). The winner (Dacita) came back to capture Saratoga’s Diana Stakes (Gd. 1). #11 Elusive Million has been entered by the connections to insure a quick pace. #14 Pretty Girl broke her maiden in Argentina as a 3-year-old in a 10-furlong, group 1 event against elders. Last out she was a blur in the stretch to get up and win her prep for this by a nose. This is Brice Blanc’s only mount of the day for a very capable trainer. #1 Ballydoyle tries elders here after disappointing against her own age group last out in the Belmont Oaks (Gd. 1). Must answer the distance question as both tries over 8 furlongs have been subpar.

Since his runner-up finish to Tepin in last year’s Breeders’ Cup Mile, #9 Mondialiste has faced the world’s best with mixed results. Though unproven at 10 furlongs, the 6-year-old son of Galileo was a soild second to Time Test last out at York going 10.5 furlongs. Race favorite #12 Tryster has a very good record at the distance, but tends to hang against top competition. He must be included given the company he’s been keeping, but is sure to be overbet. #8 Decorated Knight is a very consistent runner (80% ITM), that will be forwardly placed in a race with plenty of speed. Look for him to get a stalking trip and first jump on the deep closers.

Already proven at the distance, look for #9 Auntie Joy to get a great stalking trip behind #8 in a race without much early pace. 3 out of her last 4 races she fell to Catch a Glimpse, she won the other start. #5 Miss Gossip was butting heads with Alice Springs and Minding last year before coming stateside. Her U.S. debut resulted in a runner-up effort on the Polytrack. Look for her to move up with a return to grass. #11 Noble Beauty possesses the best late kick in the field, but looks to be compromised with a lack of pace on paper.