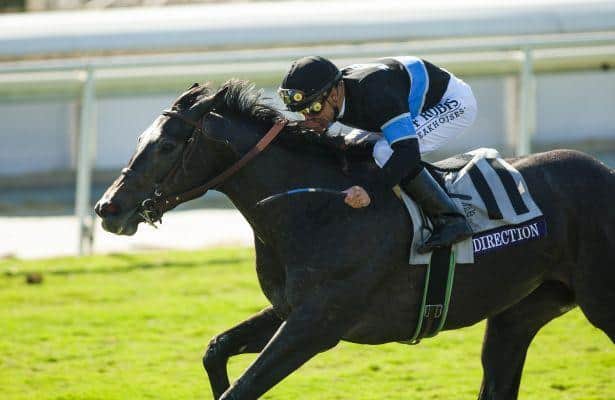 Leaves are changing, mornings are a bit cooler and footballs are flying…this can only mean one thing. Breeders’ Cup 2013 is on the horizon, and now is the time to start familiarizing yourself with who will be participating during racing’s biggest event. By doing a little recon work on each race now, you won’t feel overwhelmed when the big weekend is upon us. Here’s a quick rundown and bio on the top contenders by region for the Breeders’ Cup Turf Sprint.

1. Mizdirection captured the 2012 BC Turf Sprint off a near 5-month layoff, and attempts to follow the same pattern in 2013. The “down the hill” specialist (4-for-4) took her show on the road finishing a disappointing 5th last out in the Just A Game (G1) on Belmont Stakes Day, prompting trainer Mike Puype to send Mizdirection back home for a freshening before her title defense.

3.  Byrama is another female that likes Santa Anita’s unique 6 ½ furlong turf course. She spent most of the winter chasing Mizdirection down the hill, but successfully stretched out to routing in winning the Vanity Handicap (G1) over Betfair Hollywood Park’s synthetic surface. According to trainer Simon Callaghan, Byrama will make her next start in the Spinster Stakes (G1) at Keeneland and a decision will be made whether to go to the Breeders’ Cup afterwards.

4. **Points Offthebench, a "Win And You’re In" qualifying winner of the Bing Crosby (G1) at Del Mar in July, has yet to try grass in 7 career starts. Trainer Tim Yakteen has stated Points Offthebench’s Breeders’ Cup goal will be the Sprint on dirt.

1. Hogy is a jack off all trades that seems perfectly suited to Santa Anita turf. Earlier this summer Hogy won the Troy Stakes going 5 ½ furlongs on the grass at Saratoga, and then followed that up with a route win in the Presque Isle Mile over the Tapeta. The 4-year-old son of Offlee Wild is not Breeders’ Cup nominated, so owner William Stiritz will have to pony up $100,000 to make the starting gate.

2. Hoofit, like Caracortado, looks to make his first trip back to the Breeders’ Cup since 2011. The Graham Motion trainee is best at distances up to a mile, so the cut back to a sprint should be appreciated. Though yet to find the winner’s circle in 2013, Hoofit is stakes placed in 3 of 4 starts this year.

3. Tightend Touchdown has transformed his career since moving to the grass (6-3-3-0). He has run in all the East’s top turf sprints, and deserves a chance to travel cross country and face the world’s best.

1.  Longhunter has renewed his career with a switch to the high percentage Ramsey/Maker barn. Dominating lesser rivals this summer in New York, the 5-year-old son of Halling won the Kentucky Downs Turf Sprint last out.

2.  Unbridled’s Note has not been seen since May, but was second to Mizdirection in last year's renewal as the favorite, and has been working steadily at Churchill Downs before a return trip to Santa Anita.

3.  Great Mills was 4th in the 2012 Turf Sprint at 29-1, and 2nd to Hogy last out in the Troy. He too has been working at Churchill Downs, and has an allowance win over the Santa Anita turf course earlier this year.

According to European correspondant, Dan Munn, the contingent from across the pond should be pretty light this year.

1.   Jwala won the only European "Win And You’re In" race for this division, the Coolmore Nunthorpe Stakes at York at 40-1. She is not Breeders’ Cup eligible and the connections have no plans to bring her over.

2.   Lethal Force won both of Europe’s biggest races for sprinters the Diamond Jubilee Stakes (G1) and the July Cup (G1). Though seen as Europe’s best chance in this race, he too is not Breeders’ Cup nominated. No decision has been made to make the $100,000 gamble to supplement to the race.

3.  Sea Siren is an Australian bred recently purchased by the powerful Coolmore team, and has spent this season getting acclimated to racing in the northern hemisphere. It appears Sea Siren is set to come to the states to improve on the 10th place finish the same connections had last year with Starspangledbanner, also an Australian bred.

The final Turf Sprint "Win And You’re In" race will be the Nearctic Stakes (G1) at Woodbine on October 13th.