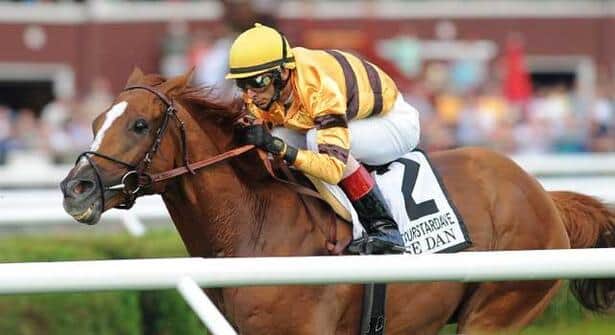 1. Skyring faces elders for the first time after running against only 3-year olds all season. Though his best races have all been all on grass, he is wildly overmatched in this spot and is a throw out.

2. Doubles Partner has not been seen since the Kentucky Derby undercard when running 4th in the Turf Classic (G1). A troubled 3rd in the Makers 46 Stakes (G1) over this course last April makes him a solid contender against these. Doubles Partner shows quite a few layoffs in his past performances, so he is accustomed to firing fresh off the bench.

3. Corporate Jungle is a horse on the rise and with an abundance of early speed signed on, the conditions should be right to help set up his powerful late kick.

4. Willcox Inn seems to only run well in Illinois, since his only two graded stakes win came in the Land Of Lincoln. Don’t expect him to take his show on the road against this top notch group.

5. Wise Dan is seen by most as America’s best chance to win the Breeders’ Cup Mile and should deliver a good effort here. In most of his races though, Wise Dan usually lays just off the pace and gets a jump on the competition before they get going. With all the early speed in here, he will have to come from farther off the pace than ever. That, combined with the fact that he’ll be a short price and it’s only a prep race, I will look elsewhere.

6. Worthadd was soundly defeated by Wise Dan last out in the Woodbine Mile (G1) and only looks like an early speed factor.

7. Data Link was compromised last time out when running 2nd in a paceless rendition of Saratoga’s Bernard Baruch Handicap (G2) off a 2-month layoff. The 4-year-old son of War Front shows 3 victories when running second off the layoff, including a win in the aforementioned Makers 46 Stakes (G1).

8. Slip and Drive picked a very difficult spot to leave Delaware Park for the first time. Though he is in career form, Slip and Drive is outmatched and a toss.

9. Ol Army is also in career form, but a non-factor against these as well.

10. Silver Max is a sophomore who found 1 ¼ miles a little too far last out in Arlington Park’s Secretariat Stakes (G1). He undefeated at a mile and appears to be the speed of the speed. A legitimate contender though this is the toughest field he has ever faced.

11. Dominus won his only grass start when setting a slow pace in the Bernard Baruch. His outside post and the middle moves in his last two starts suggest he will rate. A serious contender though compromised by a bad post.

12. Swift Warrior was impressive when winning a listed stake at Saratoga from the rail last time out. Now on the extreme outside, his task will be much more difficult today though he could land in the superfecta at a huge price.

1. Mr. Commons seems to have rebounded from his mid-season slump with a second in the Del Mar Mile (G2) while adding blinkers. The 4-year-old son of 2005 Breeders’ Cup Mile winner, Artie Schiller, was second in this race (run as the Oak Tree Mile) last year before heading to the Breeders’ Cup Mile. A presumed lack of early pace should dull his late kick Saturday, but not his chances on racing’s biggest day.

2. Trailblazer invades from Japan in preparation for a run in the 1 ½ miles Breeders’ Cup Turf. He has never started at a mile, and though he’s fired two bullet workouts at Hollywood Park, this race is nothing more than a work out.

3. Obviously is the obvious choice in the Arroyo Seco Mile and will be an overwhelming favorite. Wiring the field last out in the Del Mar Mile, Obviously should control the pace from the onset once again and a repeat outcome is expected.

4. Kettle Corn has been one of the most consistent main track handicap horses on the West Coast all season, but only has one lifetime start on the lawn. He had a nice work out over this course on September 22, but appears to be a fringe player against these at best.

5. Midnight Interlude returns to the venue of his biggest triumph (2011 Santa Anita Derby), though it was on the main track. Though he looks too slow, Midnight Interlude would be the only one to press Obviously during the early stages of the race. He appears to have fallen off form in his last two starts, which coincidentally were the only two races he wore front bandages.

A field of 13 is set to go in the 7-furlong Prix de la Foret at Longchamp Race Course in Paris, France on Sunday. With the absence of Goldikova, this year’s field is considered lackluster as far as Breeders’ Cup contenders are concerned. Don’t be surprised to see Shadwell Stable’s Mashoora to vie for favoritism with Coolmore’s Starspangledbanner. A victory by either one could land them in the BC Mile or Turf Sprint.

Please be sure to follow me on Twitter-@Cappercorner and/or friend me on facebook.com to continue the horse racing conversation!