Can Keen Ice pull off the impossible -- Again? 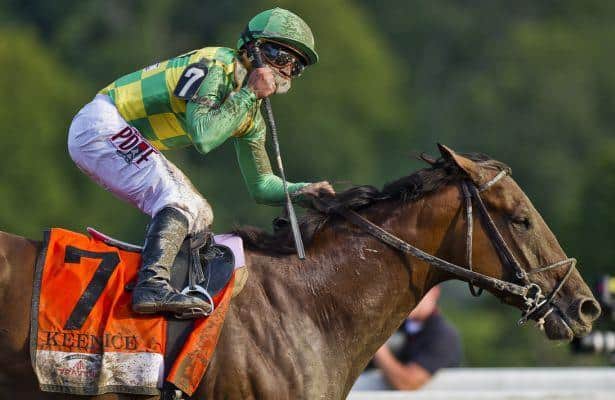 Going into the 2015 Travers Stakes, all the talk was on Triple Crown winner American Pharoah. Shipping in from the West Coast, it looked like the Travers was going to be a walk in the park for him. Aided by a speed duel between American Pharoah and Frosted, Keen Ice come from far back to pull off one of the biggest upsets in racing history. The Travers Stakes was the best race of Keen Ice's career, and it followed a third in the Belmont Stakes and second in the Haskell Invitational, both behind American Pharoah. It looked like Keen Ice was going on to bigger and better things, but it hasn't worked out at all for the now five-year-old son of Curlin.

The Travers Stakes remains the last victory for Keen Ice. His next five races were all off the board finishes, and it looked like he was struggling to keep up with everyone in front of him. After the Dubai World Cup, it was discovered he suffered a leg injury and was put on the sidelines. During his time away, his owners at Donegal Racing transferred him from Dale Romans to Todd Pletcher. He recovered, and now it seems like Keen Ice is slowly rounding back into the 2015 form. In his three races with Pletcher, he has a third in the Breeders Cup Classic, and second in the Harlan's Holiday, behind stablemate Stanford. With Keen Ice now pointing towards the Pegasus World Cup, I must ask, can he pull off the impossible again?

Keen Ice, for much of his career was a dead closer, making his run towards the end of the race, which can explain why he may not win often. Since going to Todd Pletcher, he has changed his running style, now a mid-pack, closer to the lead horse, Keen Ice is starting to show better results. Can this new strategy help him win the world's richest race? I don't know. You have the two best horses in the world in California Chrome and Arrogate to catch.

If Keen Ice is going to win the Pegasus World Cup, he will need help up front with a possible speed duel. With the presence of California Chrome, Arrogate, newcomer Noble Bird (a need the lead type of horse), it could lead to a fast pace and could help closers, like Keen Ice. He will also get the jockey services of Javier Castellano, one of the best in the game. Keen Ice will need to be around mid-pack and not too far off, if he tries be a dead closer at Gulfstream, good luck, because he might never get there.

Keen Ice has had his struggles on the track, and it looked like he was down and out, but he has come back and is running well again. His switch to Todd Pletcher has helped him, but Keen Ice still only has only two wins. He is eligible for a non-winners of two, other than. His only wins are his maiden victory and the 2015 Travers Stakes. If he can somehow add the Pegasus World Cup to that resume, he will go down as the horse that pulled off two of the biggest upsets in racing history. If this Keen Ice shows up at the Pegasus world Cup, he could have a chance to pull off the impossible -- again.

» Horse: California Chrome
» Horse: Arrogate
» Race: Travers Stakes (2015)
Meet Jeff Brynes
I have loved this sport since my early childhood. My first true memory was when my grandfather took me to Saratoga for the 2005 Travers Stakes, and watching Flower Alley come down the stretch to duel with Bellamy Road. I'll never forget that day, the roar of the crowd, and the pure excitement of winning. I became an instant fan of the game. Since then, I've visited many tracks, among them Monmouth Park, Saratoga Harness, Freehold Raceway, Belmont Park, and the Meadowlands -- all in the New York / New Jersey area.
Of all the horses I've seen in my lifetime, none have captured my imagination like Curlin. The two time Horse of the Year is, and will always be, my all-time favorite horse. Other favorites include Rachel Alexandra, Medaglia D'Oro, Wise Dan and American Pharaoh.