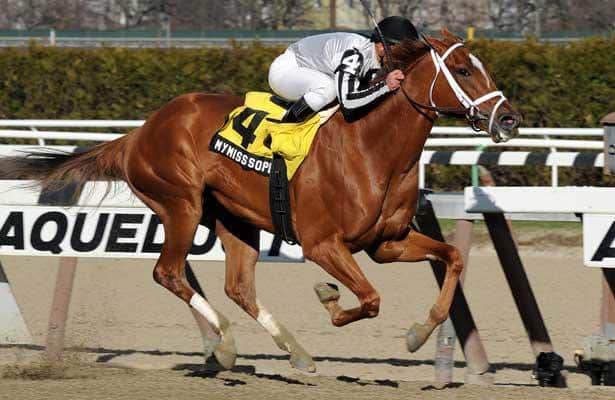 Nine fillies and mares will run in the race, including pre-race favorite My Miss Sophia (pictured above), runner up in last year’s Kentucky Oaks (G1), who will be making her 2015 debut; as well as two other graded stakes winners, Deceptive Vision and Tiz Windy.

It should, no doubt, be an exciting race.

As with many stakes races, the Doubledogdare Stakes is named after one of the sport’s great Thoroughbreds, in this case a filly who loved to run at Keeneland.

While not a Hall of Famer, Doubledogdare was a two-time champion during her racing career, and the winner of three races at the Lexington-based track.

Here is her story.

Doubledogdare was bred and owned by Claiborne Farm. Foaled in 1953, she was by Double Day-Flaming Top, by Omaha, the 1935 Triple Crown winner.

The beautiful bay filly was trained by Moody Jolley and began her racing career as a 2-year old in 1955. During that season she had six wins, two seconds and earned $127, 689 in 10 starts.

In addition to those stakes wins, she also finished second in the Fashion Stakes and the Spinaway Stakes at Saratoga.

Following the success of her 1955 campaign, Doubledogdare was honored at the end of the year by being named champion two-year-old filly.

As a 3-year-old in 1956, Doubledogdare was even better than her previous season. In all, she won seven races, five of them stakes races, finished second four times, third one time and earned $130,517 in 15 starts.

Two of her stakes wins that year came at Churchill Downs in the Oaks Prep, which later became known as the LaTroienne Stakes and is now called the Eight Belles Stake; and the Falls City Handicap.

Two more of stakes wins came at what had become her favorite track, Keeneland. There she won the Ashland Stakes, and she won the first Spinster Stakes, under jockey John Heckmann.

Her fifth stakes win that year came in the Coronet Stakes.

While Doubledogdare had some great successes throughout her enter racing career, she also had one her biggest disappointments in 1956. It came one week after her win in the Oaks Prep in the Kentucky Oaks, where she finished second in a photo finish to Princess Tuna, who was owned by Calumet Farm.

Two other races in which she finished second were the Misty Isle Handicap and the Cleopatra Handicap. She also finished third in the Arlington Classic.

With her five stakes victories that year, she was still, hands-down, the best 3-year-old filly in the country, and it earned her champion three-year-old filly honors – the second year in a row she was champion of her division.

At the end of the season, Doubledogdare was retired and went on to become a broodmare. Unfortunately, her broodmare career was not as good as her racing career as she did not have much success.

In 1992, Keeneland created the Doubledogdare Stakes in her honor as one of the great fillies to ever run at the track.

Rick Capone has been a horse racing fan since the Saturday afternoon when he saw Riva Ridge, his all-time favorite horse, win the Kentucky Derby on television.
Today, he is the sports editor for The Woodford Sun, a weekly newspaper in Versailles, Ky., a town just outside of Lexington and only 15 minutes away from Keeneland.
In addition to his duties at the Sun, Rick is a volunteer at Old Friends, the thoroughbred retirement farm in Georgetown that is owned by Michael Blowen. He even is part owner of one of the retirees there, Miss Hooligan, the grand daughter of 1988 Eclipse Award – Champion Turf Horse, Sunshine Forever, who is also on the farm.
Rick grew up in Havertown, Pa., just outside of West Philadelphia. At 20, he moved to South Florida with his family and lived a stones throw from Gulfstream. After some stops in North Carolina, Georgia and California, he currently lives in Georgetown, Ky., where he gets to drive by some of the greatest horse farms in the world on his way to work every morning.
(Photo: Miss Hooligan and Rick at Old Friends this past December. (Photo by Steve Blake)