Give him one "Mo" Chance 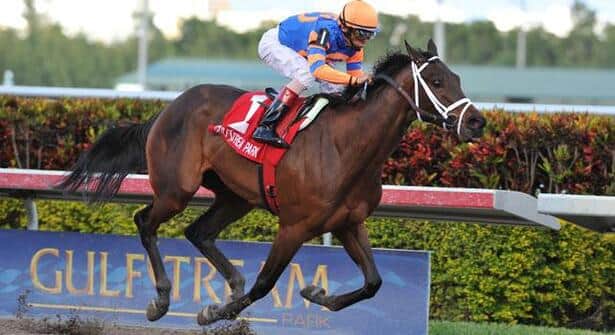 Photo: Eclipse Sportswire
The summit took place in stall five. Though this location was only 50 feet removed from the spot where this duo staged their last two post-race chats at Aqueduct, it felt as though it was happening on another planet.
The January 22nd meeting between trainer Todd Pletcher and owner Mike Repole took place following their conquest of the Toboggan Stakes (G3). The winner that day was Calibrachoa, a horse they’d recently claimed. The March 5th conversation happened in the moments after Stay Thirsty took the Gotham Stakes (G3). These horses accomplishments, taken on their own accord, were nice. Neither, though, accounted for the reason why Pletcher and Repole - at the time - seemed like they were walking on air.
As it turned out, Pletcher and Repole were actually running on air, a la Wile E. Coyote of Looney Tunes fame. Wile E’s first few strides were always successful, as he kept his eyes trained on the ever-elusive Road Runner. But eventually, he looked down, saw no ground beneath him, and proceeded to plummet from the sky.
On Saturday, after months of intense focus on the blanket of roses, Todd Pletcher and Mike Repole finally looked down.
What they saw was their pride and joy, last year’s champion two year-old Uncle Mo, suffer a stunning defeat in the Resorts World New York Casino Wood Memorial (G1). He finished third, beaten just more than a length by Toby’s Corner (coming off a pedestrian performance in the Gotham Stakes), and Arthur’s Tale (who has previously run for a tag in his career). In the 1:49.93 that it took to complete the race, Uncle Mo went from expected Kentucky Derby favorite, to expected Kentucky Derby also-ran. It can happen just that quickly in this game.
At least Wile E. Coyote was spared the indignity of having his falls happen in public, with an army of interrogators waiting to inspect the bruises and question his methods. Pletcher and Repole were not so lucky. They gathered themselves, got their thoughts together, and prepared, as best they could, for the mass inquisition.
Finally they emerged, ever so slowly, from stall five, and headed out to the center of the paddock - where the throng of reporters were ready to pounce. The front they presented was both united and brave. It was also as transparent as a piece of Saran Wrap.
“Fire away, guys.” Pletcher dared. “Who’s first?”
He found no shortage of takers.

Uncle Mo made the lead in the Wood Memorial, an event that shouldn’t have been altogether noteworthy given that he’d done it in three of his four career starts. But front-runners have not had the greatest success in the Derby, and so many people thought that Uncle Mo’s early speed would be harnessed a bit in this race, in an effort to get him accustomed to the stalking style that has proven more successful in Louisville. This notion was dispelled by Todd Pletcher after the race.
“We weren’t going to handcuff (jockey) Johnny (Velazquez) with too many instructions,” Pletcher said. “We thought there were two potential horses that he could follow, but (neither) of them went fast enough to make that happen.”
And so it was left to Uncle Mo to take the Wood Memorial field of nine through an opening quarter of 23:2, and an opening half of 47:4, fractions described by Pletcher as; “reasonable.” Against a field as purportedly weak as the one he was facing, the fractions shouldn’t have gotten a horse of Uncle Mo’s considerable stature beat.
As Uncle Mo made his way around the far turn, though, it became clear that these fractions, “reasonable” as they might’ve been, took their toll. If Uncle Mo was going to win the Wood Memorial, it wasn’t going to be with the remarkable ease with which he’d won his first four races. Pletcher noted after the race that he shared this sentiment.
“I was a little concerned turning for home at the three-sixteenths pole when he didn’t really kick clear. I thought then that we were going to be in for a fight.”
Toby’s Corner and Arthur’s Tale were the ones who were bringing the fight. Neither had the smoothest of trips. Arthur’s Tale had to come five-wide to avoid traffic at the top of the stretch. Jockey Eddie Castro, meanwhile, deftly guided his mount - Toby’s Corner- along the inside. Both proved good enough to pass a tiring Uncle Mo just inside the sixteenth pole, to the shock of the vast majority of the 12,114 in attendance.
Perhaps one of those that was shocked least of all, surprisingly enough, was life-long racetracker Mike Repole. Repole has been around long enough to have seen many a “can’t miss” horse ultimately miss.
“It’s horse racing. That’s why you have to run the races. The horse didn’t fire today.”
Mike Repole has the gift of gab. And he proved gracious with his time in defeat, just as he was in victory, exhibiting no small measure of class in the process. But even though he spent nearly fifteen minutes fielding questions after the race, answering every question that was asked of him, this remark, which he made early on in the press gathering, was as far as Repole had to go.
Because whether it was the left front quarter that he grabbed, or the honest fractions up front, or perhaps even a distaste for the Aqueduct surface, “The horse didn’t fire today” was really all that needed to be said.
*****
In a nation that prepares for its biggest sporting event by televising a four-hour pre-game show, but concludes it with a 15 minute post-game show, the Monday morning quarterbacking has already been completed. So the question becomes: What now? Should Uncle Mo march on to Louisville, as originally scheduled. Or should this defeat, by less than 2/5ths of a second, be enough of a Derby deterrent?
Todd Pletcher and Mike Repole have already attempted to put this question to bed, by way of a Sunday morning press release.
“Uncle Mo is physically sound today. He did grab his quarter at the start of the race but it is very minor and insignificant. We are shipping Uncle Mo to Churchill Downs on April 18 to continue his preparations for the KY Derby.”
The Kentucky Derby is the grandest prize in the sport, and one of the most-coveted prizes in all of American sport. Though Saturday robbed Uncle Mo of his reputation of invincibility, it ought not to have robbed him of his opportunity to compete for that wonderful prize.
After all, Wile E. Coyote never stopped chasing the Road Runner, despite repeated falls from the heavens.
Uncle Mo Todd A. Pletcher John R. Velazquez Kentucky Derby Kentucky Derby (2011)

My love of horse racing dates back to the 1999 Belmont Stakes, where I was fortunate enough to witness Chris Antley's heroics in saving the life of Charismatic from just yards away. Since then, my passion for the sport has only grown, to the point where it fueled my desire to be involved on a professional basis.

A product of Queens College and the world-renowned Bronx High School of Science, I've spent the past few years producing news talk radio on the national level. Most notably, I have worked with; Ron Reagan, Arianna Huffington, and Thom Hartmann.

In 2010, I teamed with heralded freelance writer Claire Novak to host the popular "Youbet: On Track" podcast. Together, Claire and I chronicled the Saratoga 2010 meeting daily, covering everything from Blame's thrilling conquest of the Whitney, to Rachel Alexandra's stunning defeat in the Personal Ensign. Our weekly "Backside Buzz" segment, in particular, earned great acclaim from many in the racing community.

I currently live in Bayside, New York. Contact me at jdepaolo85@gmail.com if you have any comments or questions.