She's A Tiger has them buzzing; Saint Prado back in form 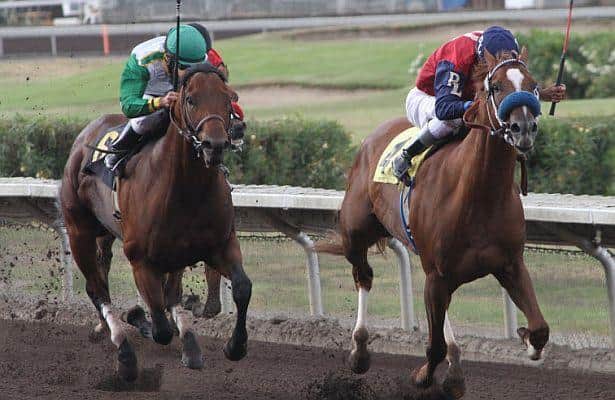 Everyone on the backside has heard it at one time or another. It’s the buzz that comes along with a sure thing. Now, too much of it can sometimes be a bad thing. Often the buzz of a special horse is too much for it to live up to.

Then again, when the hype is achieved, it can be a special moment in time.

Less than a week before the start of the 12 day summer meet at Pleasanton, I heard it. They were whispers at first. Then they turned into screams. Finally, it was like an echo out in the wilderness. The buzz had began.

“Did you hear she worked in .58 and wasn’t even breathing hard” another person told me.

“I heard Jeff said this is the best horse he has ever trained” was repeated to me more than once.

Ok, that did it. I was intrigued. Best horse Jeff has ever trained, huh?

The Jeff was Jeff Bonde. The same Jeff Bonde that has saddled Sway Away, Frumious, Cambina, Spain, Smiling Tiger….wait a minute…..Tiger ! that’s what all the buzz is.

It then became very clear. She’s a Tiger is the half sister to the ever popular and multiple graded stakes winner Smiling Tiger. Now I get it. But could she possibly live up to her brother?

I checked out the work tab. Three furlongs in 34.8 handily, four in 46.4 handily, another pair of .35’s , toss in a 5F in 58.6. Yea ok, I’m starting to buy into it. Now I started echoing a few sentiments of my own. Problem is I couldn’t find many people that didn’t already know about her.

The race in the book for day two, a  maiden special weight race for two year old fillies, didn’t fill. Of course not, the word was out. Basically you were running for second place. Yes she could have been entered down south but being this is Bonde’s home town and some of the ownership group lives here, at least one home town race was the goal.

Second attempt…success, well kind of. The race filled with 5 so it was a go but as we figured,  there was a scratch so a field of 4 it was.

Finally on day three, the talk was done. The money was bet (she went off at 1-5), it was showtime.

To say that She’s a Tiger broke as quickly as any thoroughbred ever has, would be stretching it, but I’ll tell you, it wouldn’t be far from the truth. Under jockey Frank Alvarado, the filly cruised in wire to wire, geared down midway through the stretch fashion to win by 9 lengths.

The buzz was right. She looked every bit of what I had heard about her. But now comes the after race questions. What did she beat? What’s next to test her? Will the owners even keep her?

Only one of the those questions were more less answered so far. Bonde is pointing her to the Grade 2, $150,000 Sorrento Stakes on Aug. 7 at Del Mar. Feelings are if she ran in the $50,000 Juan Gonzalez Stakes at Pleasanton, nobody would run against her.

As for what quality she beat, will have to wait until another day to determine that.

Oh, and the question of will they keep her?

Word came the next day that the ownership group of Mark Dedomenico LLC, Allen Aldrich and Stuart Downey had been offered a seven digit sell price, but so far they are staying with her. Not bad for a $150,000 purchase at the Keeneland September Yearling Sale.

Saint Prado Back in Form

The Bonde weekend ended with a win in the $50,000 Livermore Valley Wine Stakes with Saint Prado (pictured above). The runner was at one point thought to be Kentucky Derby material, but a 7th place finish in the Sunland Derby ended those hopes.

After two more losses down south, he found himself in the winners circle in Pleasanton with a one length win over Jerry Hollendorfer’s Outside Nashville.

“I wanted to lay 2nd or 3rd behind the speed and once I took the lead I could feel Russell (Baze on Nashville) coming,” jockey Frank Alvarado said. “At least the wire came up when I needed it to.”