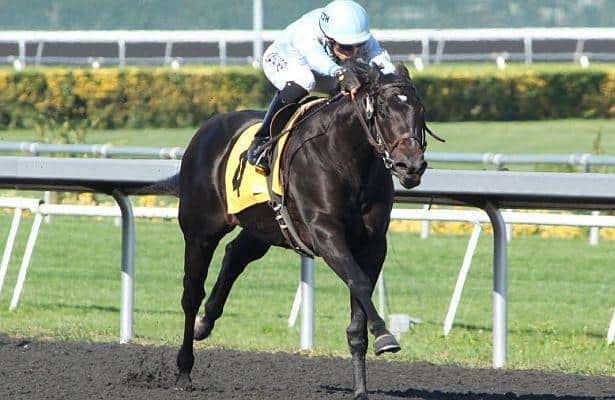 The feature race on Memorial Day at Golden Gate Fields is the Grade 3 All American Stakes which features a rematch of the San Francisco Mile with Pepper Crown and Summer Hit squaring off again. Last time, Pepper Crown pulled off a shocker, beating Summer Hit by ¾ of a length at 46-1. The two head a field of seven that vie in the $100,000 event.

However, the national racing world will be paying attention to a six furlong allowance race about two hours earlier at the track by the bay.

A contentious heat of five go to post in race 4 and the 4/5 morning line favorite is none other than reigning Eclipse Award winner Shared Belief.

Once a popular pick for favoritism in this year’s Kentucky Derby, Shared Belief, trained by Jerry Hollendorfer, will make his long awaited return to the races. When last seen on the track, the Two-Year-old Horse of the Year, won the CashCall Futurity at Betfair Hollywood Park for his third win in three lifetime races. His other wins were a maiden win at Golden Gate Fields and a victory in the Hollywood Prevue Stakes.

His unbeaten record made him an early choice for the Derby but his path to Louisville was derailed in January by a quarter crack and abscess in his right front foot. He remained on the sidelines until he made his return to training on April 15th.

Hollendorfer moved Shared Belief from his stable in southern California to GGF to keep an eye on his star and keep the injured foot on the Tapeta surface, known to be kinder on horses feet.

Since beginning morning works, Shared Belief has breezed over the GGF surface seven times with his latest being a 6-furlong drill in 1:14.80. Prior to that he drilled five furlongs in 1:00 2/5 and 1:00 4/5 from the gate.

“He’s running here because I didn’t want to ship,” said Hollendorfer.  “No matter where you run, it (the first start back) is going to be tough.”

Shared Belief began his career on October 19th, 2013 when he beat a maiden allowance field by 7 lengths. At that point he was trained by Jedd Josephson and ridden by Juan Hernandez. After the race, he was purchased privately by the current owners Jungle Racing LLC, KMN Racing LLC, Hollendrofer, Litt, Solis and Todaro.