Hollendorfer has Three for the El Camino Real Derby 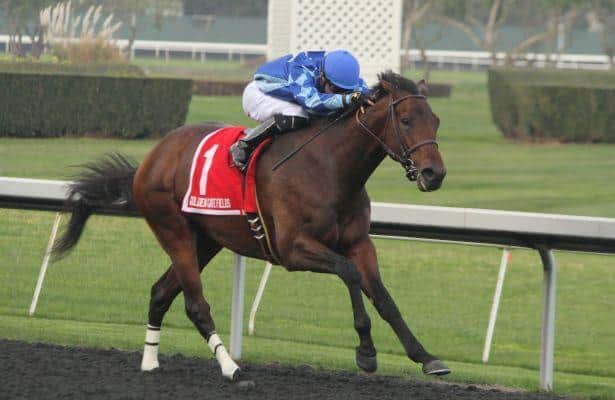 Every year, Golden Gate Fields puts its hopes to get into the national spotlight on its Kentucky Derby prep race, the $200,000 El Camino Real Derby (Grade III).

Weeks of preparation, tireless promoting, and a regional TV audience goes into the race that, over the last couple of years, has lacked star power.

This year, GGF racing secretary Patrick Mackey got just what he was hoping for. A field, that on paper, has the everything it needs to be the major focal point of the racing world on Saturday afternoon.

“We are very excited how the race came together," Mackey said. “We seem to have a solid group of horsemen and jockeys and it looks pretty competitive all the way around.”

The connections coming from the farthest, will be trainer Dale Romans, who ships Indianaughty, from his home at Gulfstream Park and will get the services of regular rider Corey Lanerie.

Second choice on the morning line, the Team Valor International entry of Indianaughty, is coming off a win in his first start in the US, a narrow victory in a $75,000 allowance race in January. He broke his maiden in England while carrying 131 pounds.

Another horse getting a lot of talk is the Jeff Bonde trained Metaboss. The son of Street Boss has turned in a couple top performances down south, the last being a 1 1/8 win over the turf course at Santa Anita in early January.

Trying to pick a winner? Let me give you a few tidbits to mull over.

Conquest Typhoon won the Grade 2 Summer Stakes and ran second in the Grade 3 Grey Stakes at Woodbine (a track that also has a poly track)…..Cross the Line won the California Derby last month at GGF beating both Stand and Salute and Soul Driver…..Indianaughty won his last race despite being bumped at the 3/16th pole and pushed out at the 1/8 pole……Mischief Clem is 3-for-6 in his career including a win in the Cal Cup Derby Black Type…..Russell Baze who rides Stand and Salute has won this race a record 9 times and 4 of the last 6 years…..trainer Jerry Hollendorfer will hope one of his three entrants will give him his 7thwin…..Mike Smith won the race in 2003 aboard Ocean Terrace, Kent Desormeaux won it in 1997 on Pacificbounty, and Alex Solis has won it twice, in 1989 on Double Quick and in 1986 aboard Snow Chief.

Here is the field and ML odds for the El Camino Real Derby.