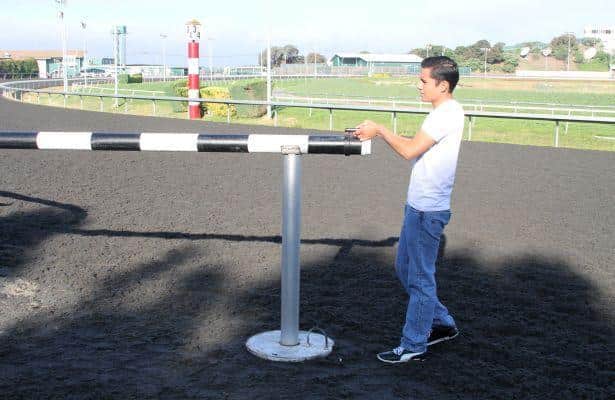 I don’t often stay all nine races these days when I hit up Golden Gate Fields on the weekends. Usually I will call it a day after 7 or so and head home to relax after a long day.

But on April 14th I did stay till the end. I wanted to watch a horse in the finale trained by Tim McCanna called Master Game. Jockey Diego Sanchez (above) liked the horse, who was a first time starter he had been working. I spent 30 minutes earlier that day talking to Diego, catching up on life stuff since we hadn’t talked for a bit.

Master Game broke from the two hole in the 6 furlong race and after just a few steps into stride, made a quick left turn, crossing in front  of the one horse, finally crashing into the temporary rail that blocks the sprinters from making the gap that leads to the clubhouse turn.

Sanchez went down hard, hitting the rail and falling to a heap as Master Game continued on around the track. As with all accidents, I went over to the track doctors office to await Diego’s return. It did not happen. After what seemed like an eternity on the backside, Sanchez was transported directly to the hospital. That is never a good sign.

According to track doctor David Seftel, Sanchez’s breathing was “very weak” and after some tense moments working on him, stabilized him enough to be transported. Sanchez was lucky to survive the fall with only a fracture between his collarbone and breast bone. He eyes a return to riding sometime in the next few weeks.

The story then turned into one of safety.

Over the past month,  Golden Gate Fields has had five different episodes of horses crashing into railings during a race. To make matters worse, it has happened at two different spots on the track. The first spot is the six furlong chute and the second, for some inexplicable reason, is on the turf course just past the turn into the stretch. It is not know why, but there is a 5 to 10 foot stretch on the inside rail that is a magnet for horses on the lead.

Here is what has taken place in just the last month.

·         April 6th – Charlamagne Wood, ridden by Abel Cedillo, leads by 1 length into the stretch and runs into the turf rail. Cedillo manages to stay aboard but the horse finishes last.

·         April 13th – Golden Child with Frank Alvarado makes a left turn out of the starting gate unseating the rider. Neither the horse nor Alvarado was injured.

·         April 13th – Dontmesswithkitten with Juan Hernandez leads by two lengths into the stretch, ducks in and  goes over the inside rail. Hernandez had a right hip contusion but returned the next day.The horse was not injured.

·         April 28th – La Perla leads by three lengths into the stretch and after ducking in,  goes over the inside rail. Jockey Julien Couton suffers a minor hip injury but returned the next day. La Perla appeared to be ok.

What they are saying

“We have watched these accidents over and over and there is no rhyme or reason why its happening in that spot on the turf,” said safety steward Paul Nicolo. “The only thing that all three had in common was they were all leading the race and all on their left lead. On two of them, the jockeys were hitting them left handed and they still went to the left. Also they all happened with the turf rail set at the number one (inner most) position. The horses heads aren't looking in or anything.”

“It’s great having Paul as the safety steward with him being a former jockey,” said GGF General Manager Joe Morris. “Paul and I have walked both spots and come up with plans to try and make both safer. We are in constant talks with the jockeys to try and make sure this doesn’t happen.”

What is being Done

So far, talk has turned into action on both fronts. Shortly after Sanchez’ injury, the track took two steps to improving that area. One, they raised the poles that hold the temporary rail by 5 or six inches to make it higher and hopefully in better view of the horses themselves. Also they repainted the rail with black and white stripes to make it more visible. So far, over the past few weeks, it seems the horses in the number one starting gate, have come out straighter.

As for the mystery spot on the turf course, well, they are taking a shot at that one also but it's not quite as simple to fix. The plan is to either pull up some hedges from the infield or get artificial hedges and put them spread out on the rail at the place the accidents have happened.

“We have a lot of hedges that are just there for no real reason but decoration on the infield,” Nicolo said. “We just pull about 12 of them up and place them for a 50 yard area at the top of the stretch and hopefully that will work.”

According to Morris, he is expecting the hedges to be put in place by the time racing resumes on Thursday.