Frank Conversation looks to come out of Nyquist's shadow 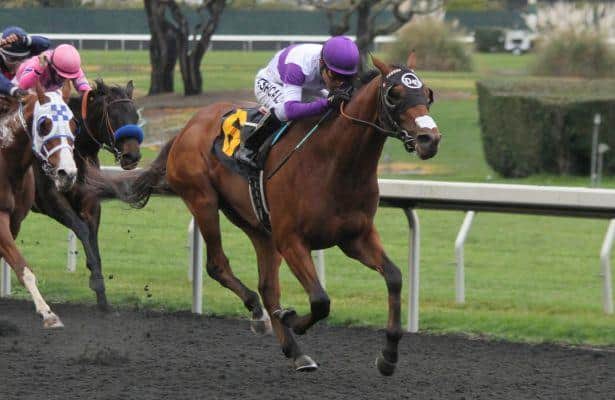 Saturday’s running of the Grade 3, $200,000 El Camino Real Derby at Golden Gate Fields, has a chance to be a coming out party for a certain horse in a big barn that lives in the shadow of his stablemate. Frank Conversation hasn’t got much Derby talk around the Doug O’Neill barn with the success of Nyquist, who is undefeated in five starts, but that could all change this weekend.

Frankie, as he is called around the barn, was the easiest of winners here last month in the prep race for Saturday's event. With this race giving 10 points to the winner for the chase to the 2016 Kentucky Derby, O’Neill may be looking at running two horses, the first Saturday in May.

"If he wins Saturday, he will definitely be pointed toward the Kentucky Derby,” O’Neill said after the draw. “He came out of the race last month in good shape and has had a couple drills since then. Mario (Gutierrez) knows him so well and he really seemed to like the Tapeta.

“There are a couple of new shooters in there though," O’Neill continued. “The horse from Woodbine (Kasseopia) can be any sort, but has good connections and good rider. The Hollendorfer horse (Mr.Coker) is stretching out but it’s hard to beat Hollendorfer anywhere. Overall though, we like our chances.”

Jeff Bonde will try to win the race for the second straight year after the victory of Metaboss last year.

Two-for-seven in his career. Is on a two-race winning streak against lesser.

One of two trained by Graham Motion. He broke his maiden in England by 9 lengths. but hasn't run since October when finishing second at Woodbine in the Grade 2 Grey Stakes.

Broke his maiden at Santa Anita last out. He is owned by Johnny Taboada, who owned the 2008 winner of this race Autism Awareness.

Broke his maiden last out at Santa Anita in MSW race. Jockey Santiago Gonzalez keeps the call for Jerry Hollendorfer.

First try in the United States for trainer Patrick Gallagher. Won a small stake in last race in Ireland.

Broke his maiden last out at GGF in a MSW against a weak field.

One for six in his career; has finished second in the California Derby and third in the Gold Rush for last year’s El Camino Derby winning trainer Jeff Bonde.

The second entrant for trainer Motion. Broke his maiden at Del Mar, before finishing 7th in the Cecil B. Demill Stakes.

One of five entrants that has two career wins. Has finished in the money in all 8 of his starts, including five stakes races.

Broke his maiden on the turf at Santa Anita, was far back in 80,000 claimer last out

This two time winner trained my Keith Desormeaux has won at both Del Mar and Santa Anita. No rider has yet to be chosen.

Looked very impressive winning here last month in the California Derby, winning by 2 1/2 lengths, beating Marquila and Algenon. Trying to get out of the shadow of stablemate Nyquist. .

Won 2 of his first 3 before finishing sixth in the Cal Derby.

Trainer Bill McLean won his 1,000th race last Sunday, but he final week was one the veteran trainer will never forget. He won with three of his last four runners to get the milestone on his first attempt. Win No.997 was a 50-1 winner, No. 999 went off at 70-1.Overall he has won with 7 of his last 20 runners.