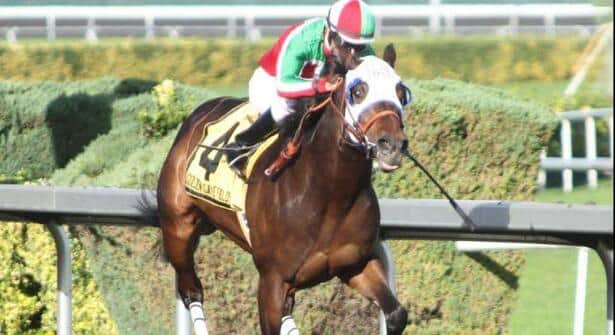 For the second straight year, the race will be part of a one hour live telecast on Comcast Sports Bay Area, with the race finishing off the hour. Prior to that, the show, which will be hosted by Comcast’s Jim Kozimore and HRTV anchor Scott Hazelton, will feature interviews with trainers Jeff Bonde and Jerry Hollenfdorfer and jockeys Kyle Frey and Russell Baze among others.As part of the pre-race festivities, GGF hosted an El Camino Real luncheon on Wednesday for the media to meet some of the key participants in the race. So as I mingled before the introductions started, I saw Aaron Gryder walking into the restaurant. I thought, interesting, GGF brought Gryder up to be a speaker….cool.Well, I couldn’t have been more wrong. Not only is he in the race but he is on the morning line favorite. Well, you couldn’t blame me, after all when we went over the probables for the race a few days before, nor he nor his horse was thought of as a runner in the race. In fact, the six or seven we counted on turned into nine when the entries came out.So with that, it’s time for my horse by horse rundown for the 32nd running of the El Camino Real Derby.When: Saturday, February 16thPost Time: 4:40 pm PSTDistance: 1 1/8 MilesAt Stake: 10 Kentucky Derby points to the winner.(In post position order)1. Wildcat Moon : 6-1 (trainer Jeff Bonde, jockey Kyle Frey)Second in the California Derby, Moon will figure to be on or near a hot pace. Last time, Frey got away with fractions of 25.2 and 50.3 in a half-length loss to Zeewat. Being able to rate and relax will be the key to his chance at a win.My Take - Has shown plenty of heart and could be in for a top 3 finish.
2. Rush In : 12-1 (trainer William E. Morey, jockey Juan Hernandez). Won at GGF last month but has failed to fire against the better competition. Another speedster that figures to suffer from the pace scenario. Lost to Zeewat two-back.My Take - Will try hard but these are too tough for him
3. Counting Days : 30-1 (trainer Carla Gaines, jockey Dennis Carr)1-for-1 on a synthetic surface bodes well but competition does not.  Since maiden breaking win by 10 lengths at Keeneland, has run down the track twice down south.My Take - Long on odds and chances4. Manando : 9-5 (trainer Bob Baffert, jockey Aaron Gryder)After breaking his maiden by 5 ½ lengths, came back to run third in the Grade 3 Sham Stakes behind Goldencents and Den’s Legacy. Could be the speed of the speed should he choose to go for it.My Take - May be left on a loose lead if Wildcat Moon rates and if so, the distance is the only question.
5. Zeewat : 5-2 (trainer Jerry Hollendorfer, jockey Russell Baze)Baze will be going for his ninth EL Camino win and Zeewat has been answering all the questions so far. Although his competition hasn’t been the best, he has won his last two going longer each time and last time rated for the first time.My Take - Has the right running style to sit and pounce and could be in a dream spot if all the speed goes.
6. Nina’s Dragon : 12-1 (trainer Lloyd Mason, jockey Julien Couton)Yet to go longer than 1 mile and has just 1 win from three starts but Couton has the right style to match this horse, sit back and make one run.My Take - Will be running on late and may pick up a piece if the speed all falls apart.
7. North Pacific : 30-1 (trainer Len Kasmerski, jockey Frank Alvarado)Broke his maiden on his 8th try and appears a far notch below these. He is 3-for-4 in the money, including a win on the synthetic surface.My Take  - Will be running in a non winners of two in a few weeks.
8. Carving : 3-1 (trainer Bob Baffert, jockey Victor Espinoza)Winner of the $100,000 Real Quiet Stakes, ran sixth in the Grade 1 Cash Call last time out losing to Violence. Distance shouldn’t be an issue with three long races to his credit. Running style has varied so his choice this time may  will help decide his fate.My Take - May not even be the best Baffert horse in the race and even though Espinoza comes north for the mount, appears a minor award at best.
9. Dice Flavor : 20-1 (trainer Patrick Gallagher, jockey Jose Valdivia Jr.)All four career races have been on the turf and Valdivia knows him well. Running style will play to his advantage but still can’t see him threatening for the top prize.              My Take - Turf horses appear to take to the Tapeta better than dirt runners and should be mid pack or better when the running begins. Chance as a longshot look.

So my picks? Call me a homer but I’m going to say Zeewat can win it all. He’s improved every race and Hollendorfer and Baze know how to get a horse ready for a race.

On Saturday, Christian Santiago-Reyes (left) won his first GGF stakes race when he guided the Doug O’Neil trained Redressthebalance to a tight win in the $50,000 California Oaks. Five horses were within 1 ½ lengths at the end, but Santiago-Reyes rode the race just as instructed and got a win he hopes propels him to more business.Then on Sunday, apprentice Jose Delgadillo rode his first career winner as he crossed the line first aboard Seeking The Stitch. Both horse and jockey broke their maidens together on a nice come from behind run. The win came on the 17-year-old's 39th career mount.