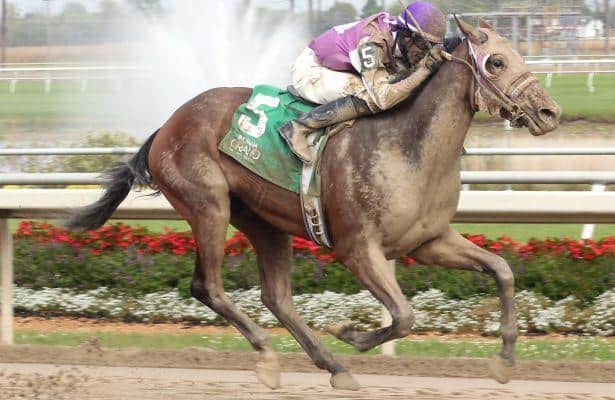 The ten-race card at Indiana Grand Wednesday night did not fail to disappoint the Hoosier State, or any else who viewed the night of rich Thoroughbred racing. Four Thoroughbred stakes races were offered on the card, and together they totalled $400,000, no small feat for Indiana horse racing. The four races, the Crown Ambassador Stakes for two-year olds, the Indiana Stallion Stakes for two-year old fillies, the Richmond Stakes for fillies and mares three-years old and up, and the Gus Grissom Stakes for those three years or older, were each valued at $100,000, which makes the night one of the most valuable in Indiana Thoroughbred racing.

Kicking off the card were two maiden special weights and a starter allowance, each with an average purse of $32,500. The four stakes races were in the middle of the card, and then an allowance optional claiming and a quarter horse maiden and allowance rounded out the card.

Mo Money took the Crown Ambassador Stakes by three and a half lengths for owner, trainer, and breeder R. Gary Patrick. The gelded son of Caiman broke last in the field of eleven, stayed towards the back until jockey Deshawn Parker urged him to close gamely down the stretch to best Classy Score and Santisteban. The final time of the six furlong event was 1:11.72, with the $2 win bet paying out $15.40.

The six furlong Indiana Stallion Stakes went to Paisley, who went off at 39.2-1 and paid out a $2 win bet of $80.40. Owner, trainer, and breeder Marvin A. Johnson got the win with Alejandro L. Contreras up. The daughter of Drinkwiththedevil broke her maiden in her sixth race, going a final time of 1:12.35 on good dirt.

Race 6, the Richmond Stakes, was won by Joyous Lady, who was guided to victory of just a head by Thomas Pompell. Joyous Lady closed well to just catch Express Run, ridden by veteran Jon Court, who had led all of the race until that point. Peyton’s Pass, the 1.10-1 favorite, stalked inside only to fade after the half pole. The final time for the mile and a sixteenth contest was 1:43.92, and the $2 win bet paid a minor $5.80, as the winner went off at 1.90-1. Joyous Lady is owned by Randy L. Clopp and Dennis Claramunt, and she is trained by Randy Klopp.

The last stakes race of the night was the Gus Grissom Stakes, which was taken by Crafty Spector. The five-year old Indiana-bred stalked the pace, put in a bid at the three-eighths pole, rallied late, and stayed clear to put in an eventual one and a half length victory. Trained by John Haran and owned by Haran Thoroughbreds, LLC., this was Crafty Spector’s seventh win of 28 starts, most of them coming at Indiana Grand or Hawthorne Park. The $2 win ticket paid $39.80 at odds of 18.90-1, with the odds-on favorite, Keeneland grad Supreme Justice, stalked early only to fade to eighth of the twelve horse field.

» Horse: Mo Money
» Horse: Crafty Spector
» Person: Alejandro L. Contreras
Meet Madison Jackson
An avid racing fan since age 10, when she first saw the movie "Secretariat," Jackson has been passionate about diving deeper into the sport, whether that be by going to various racetracks or developing contacts with those in the racing industry.
She began writing about racing in seventh grade, when a 500-word writing assignment turned into a published book. But her proudest writing accomplishment came in 2015, on a Facebook comment about the racehorse Runhappy, which earned her two tickets to the 2015 Breeders' Cup and the opportunity to hoist the Breeders' Cup Sprint garland over her shoulders.
Jackson lives in Northeast Indiana, where she keeps a variety of animals, including her two off-track Thoroughbreds, Rayonnant and Swinging Chango, her mini horse and her Paint. In the fall of 2018, she began attending the University of Louisville, where she's majoring in Equine Business Management.